Now available on the Web? Smells 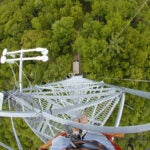 Who hasn’t been transported back to childhood by the sweet aroma of baking cookies, or to a favorite forest by the earthy smell of leaf litter, or to a summer beach by the tang of salt air?

Harvard Professor David Edwards and a former student, Rachel Field, want to harness the evocative power of smell, not just to bring us back, but to bring us closer.

Field and Edwards, the Gordon McKay Professor of the Practice of Idea Translation at the Harvard School of Engineering and Applied Sciences and core faculty member of the Wyss Institute for Biologically-Inspired Engineering, today demonstrated a smell-based device called an oPhone, which aims to add another sense to digital communications.

The pair bridged the Atlantic Ocean during a New York news conference this morning when Edwards sent a sniff of a New York breakfast — fresh bread, orange juice, and strawberries — to Paris, where colleagues returned the favor, sending the fragrance of champagne and macaroons wafting back.

“One of the very important ways in which we engage the world … is through the sense of smell. It is essential to some experiences — eating — and also interacting with friends and enemies and nature. Coffee, wine, chocolate are fundamentally aromatic experiences,” Edwards said. “The ability to bring scents to electronic communications enlarges the richness of communications online.”

The oPhone stems from a class project by Field, an engineering student who graduated from Harvard College in 2012. She took Edwards’ course “How to Create Things and Have them Matter,” which pushes students to take inventions from idea to product, assisted by funding from the Wyss Institute. Unlike many courses that prompt students to invent products, this one also provides support after the class is over, encouraging students to develop their fledgling devices.

Field, Edwards, and other collaborators have continued to work on the oPhone, founding the startup company Vapor Communications last fall. A crowd-funding campaign started this month, with plans for the device to go into production early next year.

Edwards said initial marketing interest has been expressed by officials in the coffee and wine industries, and in others where scent is a key part of a product’s appeal. Field said interest may reach more broadly into the public as well.

Field, speaking after the New York news conference while en route to Paris for additional launch events later this week, said the demonstration was a huge relief after months of hard work and sleepless nights.

“Today was pretty fantastic,” Field said. “We’ve been working on this for over two years. It’s exciting for it to become a reality.”

The oPhone system consists of several parts. It begins with the oSnap app for iPhones (an android version is in development) that allows a user to create an oNote, consisting of a photograph and a smell created out of a palette of 32 scents available in the app that can be combined in 300,000 possible combinations.

The sender then forwards the oNote to an oPhone — the hardware portion of the enterprise — which re-creates the aroma from the oSnap app. The key component of the oPhone is the oChip, which creates the actual smell.

The oPhone looks a bit like a desk telephone, only instead of a handset, it has two small hollow towers — from which the newly created scents emerge — extending from the top.

For now, oPhones are limited to “hot spots” in Paris and New York where people can experience aromatic messages.

One encouraging sign, Field said, was that even though the oSnap app has been available for only a day, people around the world have already downloaded the app to their phones.

“It’s great to see people playing around with it,” she said.