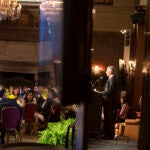 Harvard mathematics professor Jacob Lurie has been named one of five inaugural recipients of the Breakthrough Prize in Mathematics for outstanding achievement in his field. Honorees will each receive a trophy and $3 million prize at a ceremony this fall.

Lurie’s achievements cited include: his work on the foundations of higher category theory and derived algebraic geometry; the classification of fully extended topological quantum field theories; and providing a moduli-theoretic interpretation of elliptic cohomology.

The award, which was founded by Facebook CEO Mark Zuckerberg and entrepreneur and venture capitalist Yuri Milner, is the third and most recent Breakthrough Prize category, following physics and life sciences, which were first awarded last year. The award seeks both to honor the “world’s best mathematicians” and to “support their future endeavors.”

“Mathematics is essential for driving human progress and innovation in this century. This year’s Breakthrough Prize winners have made huge contributions to the field, and we’re excited to celebrate their efforts,” Zuckerberg said in a prepared statement.

Lurie is a 2000 graduate of Harvard College and received his doctorate in mathematics from Massachusetts Institute of Technology (MIT) in 2004. He was an associate professor at MIT before being named a full professor in Harvard’s Faculty of Arts and Sciences in 2008 at the age of 31.

In the future, only one prize for mathematics will be awarded per year. All of this year’s recipients have agreed to serve on the selection committee.