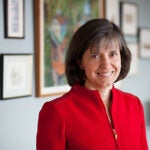 Mendillo to step down

John Huchra, Robert O. and Holly Thomis Doyle Professor of Cosmology, died at his home in Lexington, Massachusetts, at the age of 61 on October 8, 2010. His goodness, knowledge, and passion left a deep impression on astronomy and his passing has left a void with his colleagues and students. John was an observer’s observer, who mastered the art of using telescopes as a graduate student. He pioneered the exploration of the universe through redshift surveys at the Harvard- Smithsonian Center for Astrophysics and helped establish the current rate of cosmic expansion using the Hubble Space Telescope. This is the key ingredient in establishing the age of the Universe. His industry, kindness, and wisdom are legendary among astronomers.

John was born on December 23, 1948, in Jersey City, New Jersey, and grew up in Ridgefield Park. His father was a railroad conductor and his mother a homemaker. As a high school student, John immersed himself in science and science fiction. To help pay for MIT, John worked summers driving tractor-trailers onto railroad cars. He said he kept his Teamster’s Union membership current, claiming to be the only member of this Faculty who was also a member of that organization. Always modest, John said he could always drive a truck if astrophysics did not work out.

As an MIT undergraduate, John went on to write two articles for the Astrophysical Journal on theoretical topics and gained admission to graduate school at Caltech. He went to Pasadena after failing his draft physical: rippled corneas only affected his vision of nearby objects, not galaxies. As a graduate student, John worked with Wallace Sargent, himself a consummate observer, and found his calling in making telescopes do his bidding. John was the last person to use the perilous Newtonian focus at the top of the 100-inch telescope at Mount Wilson. His thesis work, on a new class of galaxies that are forming stars at an exceptional rate, was a single-author work that has been cited 290 times. As a graduate student and then as a postdoc at the Harvard-Smithsonian Center for Astrophysics (CfA) starting in 1976, John observed 100 nights in a year. He claimed it was because the meals on the mountain were free.

At the CfA, John joined forces with Marc Davis, John Tonry, and David Latham in a redshift survey that measured the spectra of distant galaxies. In an expanding universe like ours, the shift to the red of lines in the galaxy’s spectrum is an indicator of the galaxy’s distance. Redshift surveys were the way to take the two-dimensional maps of galaxy positions and turn them into three-dimensional maps that revealed the true structure of the Universe. Together with Margaret Geller, John and their colleagues discovered in the 1980s that the 3-D structure of the Universe has a frothy, bubble- like texture, with large walls of galaxies bounding extensive voids that are almost empty. We now understand these structures as the result of gravitation acting in a universe of dark matter. At the time, they were a surprise and a mystery, revealed by insightful planning, new detector technology, creative analysis techniques, and an ample dose of hard work at the telescope, much of which was supplied by John.

John’s exceptional facility in carrying out these surveys relied on a vast deck of index cards, each of which had a Polaroid picture of the target galaxy along with hand-written information on its position and brightness. He dealt cards from this database to select targets for each night’s observing. At the Multiple Mirror Telescope (MMT) on a mountaintop south of Tucson, John could determine the azimuth of the rotating building by his choice of targets. During the 1983 broadcast of the television series “V,” John selected targets to get the best reception of Tucson stations. In “V,” Earth is invaded by reptilian humanoids disguised as human beings. This may have been useful to John in his later work in academic administration.

John’s service to the astronomical community and to the Center for Astrophysics is literally too extensive to recount here. His current entry in the Astrophysics Data System shows 340 refereed entries with 38,780 citations, a prodigious number that reflects John’s industry and influence. He served as Associate Director of the CfA from 1994 to 1998, President of the American Astronomical Society from 2008 to 2010, and helped lead the National Research Council’s 2010 Decadal Survey of Astronomy and Astrophysics, which was dedicated to his memory. At the same time, from 1997 to his death John was the Director of Graduate Studies in the Department of Astronomy, providing kind and thoughtful guidance to all our students. He would invite students, especially those who had no other place to go, to his home for Thanksgiving, where he relished cooking for them.

John served as Associate Vice Provost at Harvard in 2005. Provost Steve Hyman has described how John leapt into complex tasks with energy, common sense, and penetrating intelligence. In a linguistic tour de force, Hyman noted that John had a rare combination of joie de vivre and sitzfleich that allowed him to deal with teams of lawyers on tough problems of scientific administration with cheerful energy.

John married late in life in an alliance engineered at the Center for Astrophysics. His joy with Rebecca Henderson (now McArthur University Professor at the Business School) and his pride in his son, Harry, made him a more complete person. Nobody worked harder at his craft, gave more of himself to his colleagues and students, or was less puffed up by his achievements than John. He was happiest in the observatory with the telescope controls in his hands. On cloudy nights, he was unbeatable at 8-ball pool and untouchable at pinochle, having misspent hours of his youth perfecting those skills. Counting cards, John said, is like counting galaxies.

John Huchra had it all—a life full of scientific achievement, the admiration of his colleagues, and a happy life at home. We miss him terribly.