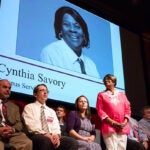 In 1974, Walter Cabot sat alone in an office at 60 Congress St. in Boston’s Financial District. Looking around at piles of freshly arrived moving boxes, he thought of the $960 million that Harvard had entrusted him to manage, and wondered what he had gotten himself into.

“I was the only employee, sitting around a lot of packing boxes, and asking: What has the corporation done to me?’” Cabot said.

In the years to come, Cabot would create an institutional investment business unlike any other. Known as Harvard Management Company (HMC), it would grow impressively, as would its reputation for investment acumen and the total of endowment funds in its care.

Today, HMC is viewed as a leader in institutional investment circles, and Harvard’s endowment, $32.7 billion at the close of the last fiscal year, is the largest in higher education. Perhaps more importantly, however, is that what also has grown has been the endowment’s positive impact on research, teaching, and learning at Harvard.

“We are what we are — the leading institution of higher education in the world — because of what you do,” Harvard President Drew Faust told the gathering of current and past HMC employees at the Harvard Club of Boston at the event marking the organization’s 40th anniversary.

When HMC started, endowment spending provided just $50 million, roughly 18 percent, of the University’s budget. Today, its annual contribution is $1.5 billion, more than a third. Over the decades, Faust said, the endowment has provided $23 billion to the University’s budgets, funding the aspirations of faculty, students, and an array of programs, some of which, like the stem cell research of scientist Doug Melton, has been hampered by wavering federal support.

“Doug is actually a great example of the endowment at work,” Faust said. “He sits in a named University professorship. He leads an area of research that for a time was a political football in Washington: allowed, disallowed, funded, defunded. What kept momentum going in stem cell science at Harvard during those years was generous philanthropy, expertly stewarded — the endowment at work.”

Melton, the Saris University Professor, also addressed the group, speaking about the impact that endowment funds have had on the University. Support from the University was key, he said, in setting up the Harvard Stem Cell Institute 10 years ago.

Stem cells, which Melton described as “the mother of all cells,” hold vast potential to treat a wide array of the most feared diseases that afflict humankind, from Parkinson’s and Alzheimer’s to diabetes and heart disease. In the early 2000s, however, the U.S. government under President George W. Bush sought to restrict stem cell research. Harvard’s financial strength — largely due to its stellar endowment returns — enabled it to support stem cell research despite the squeezed finances.

Today, Melton said, the fruits of that investment are beginning to be seen. Scientists have gained a new understanding of amyotrophic lateral sclerosis (ALS), also known as Lou Gehrig’s disease, because stem cells can create lines of diseased cells to study in the lab. Soon, doctors may be able to treat diabetes by creating sources of insulin-producing beta cells. Harvard scientists have gained new insights into aging that could one day lead to treatments that help people to live healthier, and longer.

“I close by thanking you on behalf of students and faculty,” Melton told the group. “You don’t hear it enough, but you make this a wonderful place to work.”

In addition to Melton, Faust, and Cabot, the event featured comments from Harvard Treasurer James Rothenberg, who chairs HMC’s board of directors, and outgoing HMC President and Chief Executive Officer Jane Mendillo, who had announced earlier in the week that she would step down at the end of the year. Also speaking were former HMC President and CEO Jack Meyer, and Harvard Business School Dean Emeritus Jay Light, who serves on HMC’s board.

The speakers painted a picture of HMC’s founding and the ups and downs through the decades since. When HMC began, institutional money management constituted nothing fancy, mainly holding blue-chip stocks, safe bonds, and cash. Previously, the University had employed a single outside manager to handle the funds. According to Light, it was then-President Derek Bok and Harvard Treasurer George Putnam who backed the idea of creating a management company to seek better returns.

Key to its success, Cabot said, was the commitment by Harvard leaders to what at the time was an unconventional approach. The organizers created a management company that paid salaries that were competitive with those in the investment industry, in order to attract talented managers. The organizers allowed managers to expand the areas in which they invested to seek higher gains, extending from U.S. stocks and bonds to foreign markets, private equity, natural resources, real estate, and other areas.

One strength of the Harvard endowment is that its investing timeline is decades long, while those of many traditional money managers’ is only months and years, Mendillo said. Cabot predicted that, as finding lucrative investments becomes more competitive and challenging, the business will continue to change. The test, he said, is to change with it.

“I’m convinced there will be major changes in how University endowments will be managed,” Cabot said.