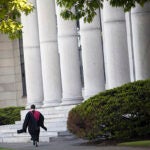 One ending, many beginnings

Dean of the College of Biological Sciences, University of California at Davis. He is a graduate of Harvard College (A.B. 1979). He also holds a Ph.D. from the University of Oxford (1982) and an M.D. from Johns Hopkins University (1987).

Valley Professor of Marine Biology and Distinguished Professor of Zoology at Oregon State University. From 2009 to 2013 she served under President Obama as Under Secretary of Commerce for Oceans and Atmosphere. She received her Ph.D. from Harvard in 1975. She also holds degrees from Colorado College (B.A. 1969) and the University of Washington (M.S. 1971).

Vice president, general counsel, and secretary, Lincoln Center for the Performing Arts. She is a graduate of Harvard College (A.B. 1986) and Harvard Law School (J.D. 1989).

The five Overseers were elected for six-year terms. Lynton was elected in 2012 to fill a two-year vacancy on the Board; he has now been elected to a full six-year term.They were chosen from a slate of eight candidates nominated by a Harvard Alumni Association committee in accordance with the election rules. Harvard degree holders cast 27,171 ballots in the election.