A malignant ‘switch’ in breast cancer 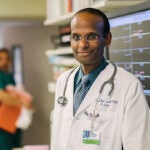 A shot against heart attacks?

A team of researchers led by David J. Mooney, the Robert P. Pinkas Family Professor of Bioengineering at the Harvard School of Engineering and Applied Sciences (SEAS), has identified a possible mechanism by which normal cells turn malignant in mammary epithelial tissues, which are frequently involved in breast cancer.

Dense mammary tissue has long been recognized as a strong indicator of risk for breast cancer. This is why regular breast examinations are considered essential to early detection. Until now, however, the significance of that tissue density has been poorly understood.

By isolating mechanical and biological variables one by one in vitro, Mooney and his research team discovered how the physical forces and chemical environment in those dense tissues can drive cells into a dangerously invasive, proliferating mode. The findings were published online in Nature Materials.

“While genetic mutations are at the root of cancer, a number of studies over the last 10 to 20 years have implicated the cellular microenvironment as playing a key role in promoting or suppressing tumor progression,” said lead author Ovijit Chaudhuri, a former postdoctoral fellow in the Mooney Lab at Harvard who recently joined the mechanical engineering faculty at Stanford University.

The new research found that the stiffness of the extracellular matrix and the availability of certain ligands (molecules that bind to cell membranes) can together determine which genes are actually called on — and whether normal epithelial cells begin to exhibit the behaviors characteristic of highly malignant cancer cells.

“Our findings suggest that evaluating the composition of this microenvironment, in addition to mammographic density, could potentially provide a better assessment of breast cancer risk,” Chaudhuri said.

Research in the Mooney Laboratory explores how the physical properties of natural biomaterials and synthetic polymers can affect the way cells sense their environment, react to it, and signal to one another. The extracellular matrix — the complex network of cross-linked proteins and polymers that connects living cells to one another and aids communication between them — offers a challenging subject for study. The usual 2-D culture of cells on petri dishes has proven to be a poor model of 3-D tissues.

“As bioengineers, we can now design 3-D culture systems where environmental parameters such as composition, porosity, and stiffness can be precisely tuned to study the importance of these cues on tumorigenesis,” said coauthor Sandeep Koshy, a Harvard graduate student in the Harvard-MIT program in Health Sciences and Technology, who works in Mooney’s lab at SEAS and at the Wyss Institute for Biologically Inspired Engineering. “We’re seeing that some of these factors have a major impact on cell behavior that is not possible to observe in conventional 2-D cell cultures.”

Prior studies have used varying amounts of a fibrous protein called collagen to adjust the stiffness of the extracellular matrix, but Mooney’s team recognized early on that collagen has more than a simple mechanical effect on cells. It can also trigger certain signaling pathways. Fibrous collagen is not normally found in the basement membrane that surrounds the mammary epithelium, so any collagen signaling could confound the conclusions of those studies.

To eliminate uncontrolled variables, the team designed a new material model that uses alginate gel, instead of collagen, to stiffen the extracellular matrix without binding to any cell receptors. When this model was in its softest mode, normal (benign) mammary epithelial cells behaved normally within it, forming cellular structures, called acini, that capture many key features of the normal mammary epithelium. But when the gel was stiffer, the cells began to increase the expression of cancer-related genes. Activity also increased on a pathway that is known to drive cell proliferation and invasion.

“It is striking that these changes, found in many human cancers, can be induced in normal mammary epithelial cells simply by varying the stiffness or composition of the matrix surrounding them,” said Koshy.

But while stiffness is a key part of the story, it is not all of it. Further experiments indicated that the cells would recover their normal behavior in high-stiffness gels if they were exposed to increasing concentrations of laminin, a protein naturally found in the basement membrane.

When the extracellular matrix is very flexible, or when a high concentration of laminin is readily available, proteins called α6β4 integrins within the cell membrane bind with laminin to form small structures called hemidesmosomes, which anchor the epithelial cells to the basement membrane. But fluorescence microscopy revealed that the cells in a stiff matrix were not forming hemidesmosomes at all, so Mooney’s team hypothesized that a stiffer matrix and a shortage of laminin were leaving the α6β4 integrins with dangling, unbound tails.

The team’s final experiments demonstrated that these unbound integrin tails are indeed up to no good. They participate in the activation of two key biochemical pathways that are necessary to induce malignant cell behaviors in the epithelial tissue.

“If further studies validate that these processes are critical in human breast cancers,” Koshy said, “the possibility exists that agents that favorably modify the biophysical properties of the extracellular matrix, or that target the receptors and signaling molecules associated with how cells sense this matrix, could be used as a new avenue for the prevention or treatment of breast cancers.”

In addition to the implications of this research for cancer biology, the development of the alginate-based extracellular matrix model is also significant.

“Studies of many other biological processes could benefit from the use of this system,” said Mooney, who in addition to his role at SEAS is a core faculty member at the Wyss Institute. “Studies on stem cell biology, wound healing, and development in a variety of tissues and organs could utilize this system.”

Mooney, Chaudhuri, and Koshy were joined in this research by Cristiana Branco da Cunha, a visiting graduate student in the Mooney lab from the Universidade do Porto in Portugal; Harvard postdoctoral fellow Jae-Won Shin; Catia S. Verbeke, who was a graduate student in engineering sciences at SEAS; and Kimberly H. Allison, associate professor of pathology at Stanford University Medical Center.

This research was supported by the National Institute of Biomedical Imaging and Bioengineering and the National Cancer Institute, the Natural Sciences and Engineering Research Council of Canada, the Howard Hughes Medical Institute, and Portugal’s Fundação para a Ciência e a Tecnologia, Fundação Calouste Gulbenkian, and Fundação Luso-Americana para o Desenvolvimento. The work was performed in part at the Center for Nanoscale Systems at Harvard and the Materials Research Science and Engineering Center at Harvard.