Their scholarly interests range from designing programming languages to health economics to the molecular changes that influence evolutionary fitness. But one thing the five faculty members awarded Harvard College Professorships in recent weeks have in common is a gift for instilling passion for education in their students.

Dean Michael D. Smith of the Faculty of Arts and Sciences (FAS) named to the prestigious positions Mahzarin R. Banaji, the Richard Clarke Cabot Professor of Social Ethics; David Cutler, the Otto Eckstein Professor of Applied Economics and professor in the department of global health and population; Hopi Hoekstra, professor of organismic and evolutionary biology and molecular and cellular biology, Alexander Agassiz Professor of Zoology in the Museum of Comparative Zoology, and curator of mammals there; Melissa McCormick, professor of Japanese art and culture in the department of history of art and architecture; and Greg Morrisett, Allen B. Cutting Professor of Computer Science.

“It’s a pleasure to recognize Mahzarin Banaji, David Cutler, Hopi Hoekstra, Melissa McCormick, and Greg Morrisett,” Smith said. “Each brings a passion for their chosen field to the classroom that inspires their students.  It’s the opportunity to learn from faculty like these that makes the Harvard College experience so unique.”

“We launch The Harvard Campaign at a moment when higher education is being challenged to reinvent itself, and we embrace this opportunity for a campaign that aims to do more than merely extend or reinforce longstanding strength and eminence,” Harvard President Drew Faust said during an earlier speech kicking off the campaign. “The Harvard Campaign calls on us to articulate and affirm the fundamental values and purposes of higher education in a world transformed by globalization and technology, a world filled with promise for improving human lives, a world in which talent recognizes no boundaries, and in which creativity and curiosity will fuel the future.”

The Harvard College Professorships are five-year appointments, begun in 1997 through a gift of John and Frances Loeb. They provide faculty with extra support for research or scholarly activities, a semester of paid leave, or summer salary.

Although she has been a member of the Harvard faculty for more than a decade, Banaji’s teaching career began significantly earlier: At age 6, she often helped her mother teach younger students at the school she operated from her home. And while her academic career has taken her a long way from those humble beginnings, Banaji still believes that working directly with students is among the most rewarding parts of her time in the classroom.

“It is a privilege to be a teacher,” she said. “To be recognized for doing something that is so intrinsically rewarding is both a surprise and a pleasure.

“So much of my teaching happens outside the standard classroom,” she added. “I bring students to problems that need analytic solutions or need creativity, or even what we might call practical intelligence. I like allowing them to linger in the uncomfortable space that requires confronting their own limits. I like providing them with the discovery that collaboration can solve many hard problems. Above all, I set standards for learning that are higher than they could have imagined for themselves.”

Using the Internet and other new technologies to democratize the learning process is exciting, Banaji said, but she believes they will never totally supplant the hands-on, personal teaching of the classroom.

“There will always remain some forms of teaching and learning that happen face-to-face,” she said. “Some of my teaching has involved working with individual freshmen in independent study and watching their neurons pop as they consider some ideas for the first time.   Some of my teaching involves working closely with more seasoned undergraduates, and teaching them about the nuts and bolts of understanding how minds work, using the methods of experimental psychology.”

Though she hasn’t yet decided how to use the additional support that comes with the College professorship, Banaji said she is considering devoting some to her research on how the mind perceives the self and some to developing an online course or teaching module, aiming to understand the nature of talent and how we recognize it.

“I want to challenge students in their thinking,” said Cutler of his approach to teaching. “One of the hard things that everyone has to do in life is to think through complex problems, using data, intuition, and theory to draw conclusions.  I want to guide the students through that situation so they have experience with it.  That will contribute not just to the problems we examine in class, but to everything they have to deal with.”

To provide students with that guidance, Cutler uses a host of classroom techniques — but not standing in front of the class and lecturing.

“I haven’t written on the blackboard in years,” he said. “More seriously, we can interact with students more readily and structure class in better ways. For example, I can present hard material in many different ways: in class, in notes, or through video. I can assign problem sets that involve interacting with the world — looking at health insurance exchanges in the U.S. or testing theories about the spread of HIV/AIDS in sub-Saharan Africa. I also use email to interact with students more frequently and with greater precision than a quick question in office hours.”

Cutler said he plans to use the additional support that comes with the position to explore ways to bring even more discussion and interaction to his classes.

“I want to experiment with more ways to encourage student comments and discussion,” he said. “One thing that I like to do is watch some classes of very good lecturers. I am going to try even more ways to solicit input from students, have them think on their feet, and interact with me, and their fellow classmates, in class. As with research, I believe we can always learn more.”

For Hoekstra, little is more satisfying than illuminating new subjects and ideas for her students, and getting — or keeping — them interested in science.

“I love to start lectures with a story — sometimes personal, sometimes historical, sometimes mysterious — to try to draw students into the material,” she said. “Then the goal is to keep them engaged by making them think, not just listen, even in a large lecture course.

“After every lecture, I write down everything that I could improve the next year, the concepts that students found the most difficult, the examples that weren’t crystal clear,” she continued. “I never feel like I’ve got it perfect; I’m really hard on myself. Thus, needless to say, I’m surprised and thrilled. I love teaching, especially aspiring young scientists, so this is really special.”

Though being named a College professor recognizes her excellence in the classroom, Hoekstra said she won’t rest on her laurels, and plans to use the additional support to continue to improve her teaching.

“Harvard professors are well recognized as leaders in scholarship and research, but we have all chosen to come to an institution where our job is to excel at both research and teaching,” she said. “It’s a difficult balance, but I learn so much from teaching that I can’t imagine one without the other.

“I think this recognition will inspire me to do more — both improving my teaching in the classroom and remaining dedicated to teaching outside the classroom — from implementing new creative approaches in lecturing to providing undergraduates with hands-on research opportunities in my lab. I think many of us can point to a particular teacher or research experience that inspired us and influenced our career path. I want to pay that forward.”

Though her students get to experience everything from behind-the-scenes museum visits to assignments that involve writing and illustrating their own graphic novels to conversations with Japanese filmmakers and animators, McCormick believes the most important part of teaching comes from in-class interactions between students.

“No matter the size of the course, I always encourage students to speak and try to weave their observations and questions into the lecture whenever possible,” she said. “Doing so takes advantage of the invaluable collective brainpower and diverse life experience that each person brings to the class. But perhaps most importantly, in teaching art history, saying is learning. The minute I call on a student to describe a painting, the quality of attention in the room changes; all the students look with more intensity. In the best scenarios, we work through an image together, asking it questions, figuring out what it demands of us, ultimately arriving at conclusions and links to larger issues that I want them to understand … and it becomes all the more important that they get there at least in part on their own initiative.”

McCormick also often assigns students group projects, not only because that allows them to make new discoveries on their own, but because such collaborative work helps to foster camaraderie among students.

“Last semester teams of three to four students assumed different roles to create a narrative painting that would demonstrate the representational techniques and storytelling devices studied in class,” she said. “As they search for an appropriate visual language, they come to realize that artists need images to make new images, that a painting’s compositional elements can be shaped historically, and how collaborative units of artistic production were driven by societal structures. The new perspectives on artistic process enrich their interpretation of artworks. And the strong sense of camaraderie they develop with one another is a welcome byproduct of the exercise.”

With the additional support that comes with the professorship, McCormick hopes to research an exhibition and book project, as well as develop a number of teaching-related initiatives, including a website to publish and exhibit student work, and a travel seminar to Japan centered on the 11th-century novel “Tale of Genji.” 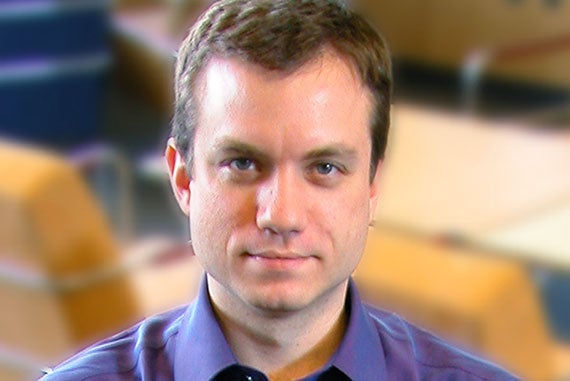 When it comes to his teaching philosophy, Morrisett prefers to emphasize not what he knows, but what he doesn’t. By focusing on his own need to learn, both from students and other faculty, he said, he’s able to remain open to new ideas in the classroom.

“Harvard students are great at giving constructive feedback on course evaluations, and I try hard to fix the things they’ve identified as problematic,” he said.

One area that in recent years has become fertile ground for new experiments in teaching, he said, relates to the ubiquity of digital tools in classrooms. Such tools are forcing faculty to reconsider the classroom experience so that their time with students is more direct and meaningful, for both teacher and student.

“In computer science, and engineering more generally, students primarily learn when they are building things and getting their hands dirty, not when they’re in a lecture hall,” he said. “These new tools make it possible to shift some aspects of a lecture into video, but that just opens up the question as to how best can we spend the time we have together?”

In small classes, he said, the use of technology has enabled professors to spend more time working with students on problems, designs, and code, while in larger classes it often plays an auxiliary role in the form of background videos that help better explain an idea or concept.

Going forward, Morrisett believes the ability to offer classes online will open the door to students across the globe.

“Another thing that I think is exciting is the move to make our course materials accessible to the wider world,” he said. “I love the idea that the work we all put into our classes should be accessible to the general public, the same way the books we write are accessible in libraries across the world, or the open software we create in research is fueling innovation in industry. This is wonderful for learners everywhere, and helps fulfill a central mission of Harvard, to not only create new ideas, but to make them accessible.”