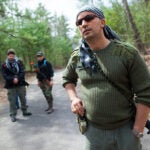 A taste of danger

Endlessly waiting for ‘leaf out,’ flowering in Boston and beyond

After a harsh winter and an April reluctant to warm, New Englanders are keeping their eyes peeled for signs of a lasting spring. Among them is Elizabeth Wolkovich, a Harvard assistant professor of organismic and evolutionary biology who observes changes in trees and other plants with more than casual interest.

Wolkovich, appointed in January and based at the Arnold Arboretum and the Department of Organismic and Evolutionary Biology, is an authority on plant phenology, or the timing of natural life cycle events, and how those may be affected by climate change. The Gazette spoke with her to get an insider’s view of this slow-blooming spring and how it fits into the puzzle of past and future climate change.

GAZETTE: What is phenology, and how does your research relate to it?

I study plant phenology, such as the day we see leaves coming out on a tree each spring or the day of flowering. It also includes things like the day of leaf coloring in the fall or the day leaves come off a tree or that an herbaceous species senesces.

I work on global estimates of how phenology has shifted with climate change. In particular, I’m interested in understanding how diverse species have responded to climate change, as opposed to simple average estimates. And I’m also interested in the indirect effects. How do different communities respond to climate change? What does it mean if one species is shifting when it leafs or flowers a lot and another species isn’t? Or are different species interacting because the timing has shifted so dramatically for some but not others?

GAZETTE: And what has your research told us about this phenomenon?

WOLKOVICH: One of the first things I did with a group of great collaborators when I started working on phenology is try to pull together a better set of data on how plants have responded to climate change over the last 30 to 150 years.

Up until five to 10 years ago, our global estimates of how plants responded to temperature and climate change mainly came from Europe. Europeans have phenomenal, incredible phenology records. They love to collect phenology data. They have been collecting it from before the time of temperature [data collection]. It is their version of the thermometer. It is nature’s version of the thermometer.

They had amassed this tremendous data set, millions of observations, hundreds of thousands of time-series data, but it’s very Europe-focused. Europe has a certain climate, and because of the way these data were collected, it covered a small number of species, about 150.

What I wanted to do was draw in other data sets. These were often not collected by scientific organizations, as they were in Europe. They were very species-rich because we had people who had gone out and collected data on every species in the community, 100 to 500 different species.

We pulled all those together and from them we found that there is a very, very consistent average estimate for changes in Northern Hemisphere plant species in response to temperature. They advance four to six days per degree Celsius of warming.

Boston, which has climate change from the effects of greenhouse gases, and also an urban heat-island effect because there are much lower levels of vegetation here than in the surrounding countryside, has warmed significantly, about 2.4 degrees C. That means an advance of around 10 to 15 days in the start of spring in the area.

It’s actually more than that, though, because our estimate includes a diverse set of species across the growing season. We know that early season species tend to be the most sensitive to warming, and those are the species in which we see the greatest advances due to climate change.

That’s why usually the average estimate for changes in the start of spring around Boston is an advance of three or more weeks over the last 100 years.

GAZETTE: What does that mean to people looking out their windows?

WOLKOVICH: There’s [annual] variability, and that’s one of the things we all have to accept about climate.

Understanding climate change doesn’t mean we know the weather next week very well. We also can’t predict the climate next year, but we can give you a good estimate of what climate will look like in 50 years compared with today.

An example of what we’re seeing is the fact that we’ve had two or three of the earliest spring leaf-out events on record in the last three to five years.  Yes, some years have long, hard winters like this year. I don’t believe leaf-out is dramatically early this year compared to the long-term mean.

GAZETTE: Can we draw lessons from a winter like this, on the difference between climate and weather and how, due to variability, you’re always going to get years like this?

WOLKOVICH: Certainly, weather refers to the short-term effects and climate to the large-scale spatial and temporal patterns that we see in the Earth’s system.

We know that the weather here is generally going to be different from 30 miles away. What we have seen over time with temperature is the variability is the same. There’s a mix of early and late winters and harsh winters and more mild winters. For the last 11,000 years winters probably have been relatively similar to this in New England. But we’re seeing more often that winters are ending earlier.

WOLKOVICH: We predicted that the place that will experience the largest amount of climate change is the Arctic. Over the next 80 years, we’re predicting most terrestrial areas to increase at least 2 degrees Celsius over to what they have already warmed. In the Arctic, those projections are 5 to 6 degrees Celsius. And we’re already seeing that warming has been much greater in the Arctic.

The West is the place where we expect the dominant change to be precipitation. So this year it seemed like a very late and cold winter in New England, kind of like the good old days. But out West, we had one of the more dramatic droughts on record.