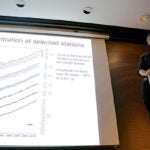 Another step in the wrong direction

Music blared, LEDs blinked, and jaws dropped Tuesday at the SEAS Design and Project Fair, a celebration of creative problem-solving by students at the School of Engineering and Applied Sciences (SEAS).

The festival carries ideas from one scientific field to another and allows them to cross-pollinate. It also provides an incentive for harried students in the last few weeks of the semester to generate a polished and presentable final product. But most importantly, said Fawwaz Habbal, executive dean for education and research, the fair encourages “anyone, whether it’s for homework or their own self-expression, to go ahead and create something.”

Visitors entering the Science Center Plaza tent met hundreds of students from ES 50: “Introduction to Electrical Engineering,” a course that attracts undergraduates from all concentrations with its lively teaching staff and emphasis on creativity. They were joined by students from more than a dozen SEAS courses in engineering sciences, applied mathematics, and computer science who contributed demonstrations, discoveries, posters, and prototypes to the fair.

Some were just fun, like the giant piano keyboard that sprawled across the floor of the tent, or the arcade-style variations on the addictive game “2048,” using light-up colored squares or LEDs instead of numbers.

A group of undergraduates in ES 50 added a bit of extra mayhem with their SMS-based prank hotline, accessible to all. Texting the word “joyride” caused a remote-controlled car to appear out of nowhere, colliding erratically with visitors’ feet as it sped through the aisles. Another text message triggered a tank hidden beneath the exhibit tables to spray a jet of water, or turned lights on and off across the room.

But most projects — hundreds of them — sought a higher purpose, tackling challenges in graphic design, mathematics, education, astronomy, music, and everyday logistics.

Philosophy concentrator Simon Huesken ’14 and chemist Sean Poppen ’16 wanted to create a new kind of tactile input device, beyond mice and tablets, to make painting software easier to use. Click-and-drag scale bars for attributes such as color or brush size can interrupt the actual drawing process, so they created a glove with magnets and sensors embedded in the fingertips. Hold your thumb and forefinger closer together and the students’ back-end software understands you want a narrower brush stroke. Three fingers can blend red, green, and blue pigments into precise tints and shades.

“It makes me really happy that I have created something that you can use, and it works,” said Huesken, who took ES 50 in his final semester at Harvard. After years of more abstract learning, he said, “I really, really wanted to build something, and this class helped me do that.”

Neurobiology concentrator Ben Glauser ’15 participates in Harvard track and field. With two teammates and a classmate in ES 50, he built a set of gates that use lasers to measure running times.

Amy Weiss-Meyer ’15, a history and literature concentrator, had always been interested in how typographical design contributes to aesthetics and readability. She and her ES 50 classmates built a small, remote-controlled robot that wields a pen, drawing a trail behind it as it roams. They designed a new font from scratch and used the robot to explore code-based approaches to leading and kerning.

“I didn’t really know anything about engineering, and I wanted to take this course to learn more about it,” Weiss-Meyer said. “Once I saw what was possible, my thinking progressed.”

Her team is now considering how a robot like theirs might be useful to people with impaired motor skills who have trouble drawing or writing on their own.

A group of graduate students at Harvard Extension School tackled another challenge in graphic design: converting pixel-based bitmap images to curve-based vector graphics that can be enlarged without sacrificing detail. Suraj Khetarpal, Jeremy Watson, Jeffry Pincus, and Dinesh Malav, students in CS 51, “Introduction to Computer Science II,” wrote a program that detects edges within a black-and-white image and then uses them to mathematically define contours.

While CS 50, “Introduction to Computer Science,” provides a whirlwind introduction to programming, Henry Leitner’s CS 51 teaches students to more deliberately design code that is elegant, efficient, safe, consistent, and accessible to other programmers.

“It’s been fun and challenging,” said Christian Liu ’17, who with three other freshmen created a tool that solves symbolic algebra problems — not down to a string of decimal figures, but the way a human would.

Students in AM 207, “Advanced Scientific Computing,” solve complex problems another way, using a set of techniques called stochastic optimization. Anita Mehrotra, a master’s candidate in computational science and engineering, used Bayesian analysis to investigate correlations between K-12 education variables and long-term outcomes such as college attendance and lifetime income. Yuan-Sen Ting and Hope How-Huan Chen, graduate students in the department of astronomy, used machine learning techniques to improve the selection of multiple-choice questions for standardized tests. The system reduces bias against particular social groups while improving the accuracy of the test as a measure of overall knowledge.

Others discovered new ways to predict temperatures across the United States, detect moving objects in space, and optimize taxicab routes.

Creating a tool or product that functions properly is essential, but it’s equally important to create something that people actually want, said Beth Altringer, a lecturer on innovation and design. She teaches ES 22, “Design Survivor: Experiential Lessons in Designing for Desirability,” which is offered jointly by SEAS and the Graduate School of Design.

Altringer assigns her class a new challenge weekly, each intended to throw students out of their comfort zones and prompt them to question their assumptions. At the end of every week, they must present a product concept and defend their design choices. “I ask them, ‘Has anyone in this room ever thought about this before? No?’ And then they’ve got a week.”

“I made a watch with someone, I made a song with someone, I made a commercial with someone, I made my app myself, we made a design for a restaurant experience — pretty much any idea you can think of — in a challenge connected with a product,” said Christopher Cleveland ’14, a senior concentrating in sociology and in mind, brain, and behavior. Besides exposing him to mobile app design, Adobe design software, and prototyping techniques like 3-D printing and laser cutting, he said, the course “helped me think about communication — communicating clearly to get people to follow along with the goals of your product design.”

That kind of confident leadership is essential for graduates in any field, said Habbal, who has overseen the expansion of the design-based curriculum at SEAS and the growth of the undergraduate teaching labs.

“The idea of design thinking can be applied anywhere, and the concept of solving problems is a universal concept,” he said. “An engineer by definition solves problems for humanity, and that’s what we’d love everybody to be thinking about.”

The chance to create something new, something of one’s own, attracts students from across Harvard College and the graduate schools.

“The hands-on stuff is really what everybody craves, and that’s the most fun part,” said Alex Raun ’17, who took ES 50 this semester and plans to declare a concentration in engineering sciences in the fall. “I’m glad that instead of a final exam we have this project to work toward. It’s cool.”