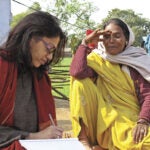 Religion and the Indian election

Henry Louis Gates Jr., the Alphonse Fletcher University Professor and director of the Hutchins Center for African and African American Research, moderated an open, free-flowing, and at times amusing 90-minute interfaith dialogue among “three remarkable American leaders”: Rabbi Angela W. Buchdahl, senior rabbi-designate at New York City’s Central Synagogue; Sheik Yasir Qadhi, dean of academic affairs at the Al-Maghrib Institute; and the Rev. J. Brent Walker, executive director of the Baptist Joint Committee for Religious Liberty. The panel discussed, among other things, the role of religion in public life, the challenges of interfaith dialogue, and the critical nature of religion in making the world better.

The Ambassador John L. Loeb Jr. Initiative on Religious Freedom and Its Implications, which sponsored the event, is a joint program of Harvard’s Center for American Political Studies (CAPS) and the George Washington Institute for Religious Freedom. It was established to explore the causes, processes, and effects of religious freedom in cultures and countries by supporting Harvard research on the topic, as well as academic conferences and workshops.

“This inspiring symposium is part of a larger and longer conversation on religious freedom, pluralism, and toleration, and I’m both deeply grateful to Ambassador Loeb for supporting this vision and thrilled that Harvard is launching this dialogue,” added Professor Daniel Carpenter, director of CAPS.

Gates began the inaugural symposium on May 1 by asking the panelists how they viewed faith-based political activism in a climate of separation of church and state.

Walker answered first: “Separation doesn’t mean we need to go and hide and not try to make the world better. We Baptists roll up our sleeves and get involved, motivated by our religious convictions. Martin Luther King and many others lived according to this tradition, and the country is far better off for it.”

Qadhi added that the Sept. 11, 2001, terrorist attacks mobilized American Muslims more than anything else. “To be American means to fight for your rights and be integrated into society. After 9/11, we’re still battling, and we will claim our rightful place” despite ongoing waves of Islamophobia, he said.

Buchdahl said she’s been mobilizing faith-based activism around anti-violence and equal opportunity: “We are building coalitions around gun control and violence, as well as quality education and problems of income inequality. Each of these are moral issues that are rooted in our faith traditions. If our faith-based communities aren’t talking about these issues, then we don’t have any reason for being.”

Gates’ next question was: “How do you go about building bridges among diverse religious faiths and nonreligious groups?”

Walker said finding areas of common interest is key, as is mutual respect, especially for religious differences: “We don’t need to agree on everything to work together.”

Qadhi emphasized the need to air religious differences. “We need to acknowledge the elephants in the room, to move beyond platitudes in order to concentrate on the very real differences among us.” Qadhi offered the example of a large interfaith service he’d participated in at a Memphis synagogue. “A pastor at this interfaith service ended his sermon by saying, ‘I have to tell you that unless you believe in the Lord Savior Jesus Christ, you won’t go to heaven.’ Now this caused an awkward moment,” said Qadhi, pausing until the audience stopped chuckling.

“So the next morning, the synagogue’s senior rabbi called me to apologize if I’d felt uncomfortable about what the pastor had said. And, by the way, there must be a good joke here about the rabbi who calls the sheik to apologize for the pastor. But I told the rabbi that I hadn’t felt offended at all.” Airing these differences, said Qadhi, had improved his relationship with the pastor. “Sometimes we need to let these elephants out of the room before we can discuss other issues.”

Gates then asked Buchdahl about whether she’d experienced difficulties navigating both her Korean and Jewish identities. “Navigating intersections of cultures and religions is something I’ve always done,” she explained. “I was born in South Korea to a Korean mother and a Jewish father. And thanks to Professor Gates [via his PBS TV series “Finding Your Roots”], I learned that I was a descendant of Korean kings. So I now get to say that I’m truly a ‘Jewish Korean princess.’ ”

When Gates opened up the event to audience questions, attendee Arjun Singh asked the panelists how they engage in dialogue with the 30 percent of people under 30 who have no identification with religion, citing a recent Pew Research Center survey. “As a person of faith,” answered Buchdahl, “I feel that God has had a very bad marketing campaign. Too many people claim to speak definitively for God, and it’s become a real turnoff for young people. We need to do a better job letting people know what God stands for.”

In the hallway after the panel had ended, Singh was asked for his reaction to the evening’s interfaith dialogue. “I thought it was really valuable,” Singh said. “I’d describe myself as among the 30 percent of young people who put ‘none’ for their religion, but I was very happy to hear from three leaders who are powerful and entrenched in their faith-based communities. I especially liked the discussion about how to use religion for good in a growingly nonreligious world. All three leaders described religion as a tool meant to make the world a better place. It’s important to be reminded of this.”