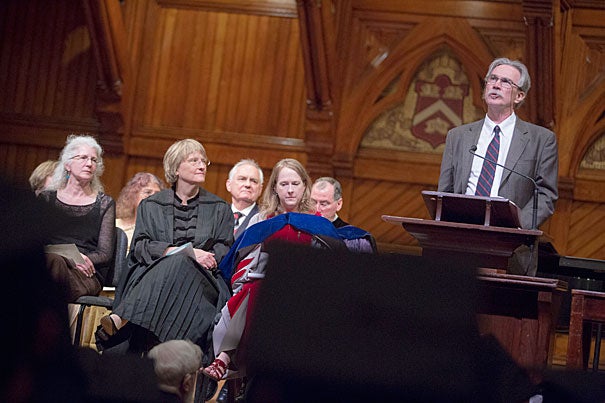 Walter White, the central character of the television series “Breaking Bad,” is a middle-aged chemistry teacher who becomes a drug dealer after learning he has terminal cancer. During an on-campus public discussion with President Drew Faust last month, the show’s creator, Vincent Gilligan, said that White’s terminal illness freed him from the fear that had held him to the straight and narrow.

Harvard College’s Class of 2014, whose members will receive their diplomas at Thursday’s Commencement ceremonies, should consider their own futures with a similar fearlessness, Faust said. But where White’s selfish motivations led him into a downward spiral, she urged graduates to “break good,” “face outward,” and act for the betterment of the larger community.

Good work, Faust said, doesn’t just accomplish admirable aims through a task; it can also bring out the best in others. She quoted South African leader Nelson Mandela, who admitted being fearful during his long struggle for freedom, but who also said that by appearing brave, he inspired others, and it was their hopeful response that ultimately gave him the strength to conquer his own fear.

“We are interdependent. Our work and our lives depend on others, as theirs do upon us,” Faust said. “With the right combination of luck and learning, humility and compassion, we do not break bad. Instead we can create moments of grace with and for one another.”

The Baccalaureate also served as something of a dress rehearsal for Thursday’s Commencement ceremonies. Seniors wore their caps and gowns and lined up in the Old Yard in front of Holworthy Hall just before 2 p.m. They processed past University Hall and the John Harvard Statue, and into Tercentenary Theatre before entering the church.

The service was presided over by Jonathan Walton, Plummer Professor of Christian Morals and Pusey Minister in the Memorial Church. Speakers read scripture selections from several religions in their originating languages, as well as in English, causing the church to echo with holy words in Hebrew, Arabic, Chinese, Sanscrit, Punjabi, Greek. and English.

Walton opened and closed the service, offering welcoming words and a reminder to the newly minted graduates that although they may feel as if they’re nearing an end, their graduation is really a beginning.

“This week is neither one of culmination nor conclusion,” Walton said. “It is Commencement. It is just the beginning.”

Seniors were anticipating their hard-won graduation with a mixture of feelings. Emily Hu, a Currier House human evolutionary biology concentrator, said she was excited that Commencement was at hand. After graduation, she plans to work in a laboratory at Massachusetts General Hospital.

Margaret Wittenmyer, a Kirkland House government concentrator, enjoyed the diversity of religions represented at the service, particularly since some of her friends gave readings. Whittenmyer, who is heading to law school at the University of Texas at Austin in the fall, admitted being a bit nervous herself.

“It’s just kind of shocking to find yourself at the end,” Wittenmyer said.

Wittenmyer is part of a class that traversed a winding path through Harvard. In her speech, Faust recounted some of the important events that marked the seniors’ tenure, including the Boston Marathon bombings, Japan’s earthquake and tsunami, and superstorm Sandy. The students attended Harvard’s 375th anniversary celebration, turning a rainout into a muddy dance party. They studied through last winter’s polar vortex, and sent some classmates to the Olympics. The football team beat Yale in The Game four years straight to bring the streak to seven years, and the men’s basketball team went to the NCAA tournament three times.

Through it all, Faust said, the class has put its stamp on the University, as it will on the world in the years to come.

“Visitas gets canceled, so you reinvent it. The 375th is hit by a deluge — you dance in the mud. A cheating scandal rocks the College, so you successfully advocate for an honor code. Bombs strike the marathon, so you take care of one another and you run again,” Faust said. “Reach beyond what you do for yourselves to what you do for another. If any class can do this, it is yours. The world has never needed you more.”