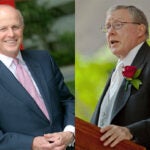 Deans Pfister and Khurana, from differing backgrounds, share the goal of fostering belonging, learning, and excellence in the College

When the leadership of Harvard College changes hands later this summer from interim Dean Donald Pfister to incoming Dean Rakesh Khurana, undergraduates will find that while the life experiences and research backgrounds of the two couldn’t be more different, their focus on the job of dean is the same.

Both Pfister and Khurana believe strongly that an important role for the dean is to foster and build the College community of learning.

“My goals were modest in a way, but they were really about reaching out and connecting with the students, and working within the College to make sure we weren’t merely in a transition, but moving the College forward,” said Pfister, the Asa Gray Professor of Systematic Botany. “When I think about the year, a lot of what we have been able to do has been about community, which is good because that is where I started when I came in.”

Pfister was named interim dean in July, taking over for Evelynn M. Hammonds, who completed her five-year term as dean shortly after Commencement 2013. As Faculty of Arts and Sciences Dean Michael D. Smith put together a search committee to find a replacement, he appointed Pfister on an interim basis.

Immediately, Pfister, who has taught at Harvard for 40 years and had served as master of Kirkland House from 1982 to 2000, sought to connect directly with students by word and action. He began sending all undergraduates periodic email messages touching on a wide variety of topics, such as some of the incredible things College students were doing, the latest book he was reading, and — he’s a botanist — the trees of the Yard and certain fungi he had come across.

“Nearly every conversation I have had with a student has almost always started with, ‘I just love your emails.’ I was a surprised because when I send an email out to students in my class, they never read them. But these emails seem to have been very widely read,” Pfister said. “I was thinking emails were kind of retro, but they worked, and I think they worked because it set the tone that someone was listening. It goes back to community.”

In addition to his emails, Pfister made it a point to be out around the campus, visiting the Houses, attending festivities and performances, and meeting with students as much as possible. One winter morning, he rode the shuttle, where he interacted with students and even handed out bookmarks with his office hours listed on the back.

“I was concerned office hours were just going to be a thing where students would come in and complain, but it was really an opportunity to help students, and to direct them to resources,” he said. “And it was a great way to hear what was really on the minds of the students.”

While his research interests are different, Khurana is coming into the job on a path that has some similarities to that which Pfister traveled. Both are highly respected teachers, veterans of various committees, and have served as House masters. In fact, as dean, Khurana will continue to serve as co-master of Cabot House.

His vision for the future of the College builds on the foundation that Pfister has laid.

“We want to ensure we are providing students a deeply transformative experience, one that is transformative intellectually, socially, and personally, that will prepare them for a life of service and leadership,” Khurana said. “Our students have the opportunity to interact with the best faculty in the world, who are doing research that is changing the way we think about and understand the human condition. They are asking fundamental questions about the nature of life and where we come from, and imagining new futures.”

The Marvin Bower Professor of Leadership Development at Harvard Business School (HBS) and professor of sociology in the Faculty of Arts and Sciences (FAS), Khurana said that for nearly 400 years Harvard has produced leaders and shaped academia, and that should continue.

“Harvard College should be seen as the leading College in the world and will set the standard for liberal arts colleges for the next 100 years. We should be providing a model for other schools to revitalize and reenergize their programs,” Khurana said. “This is who we are. Our students leave here and exert ripples across the world.”