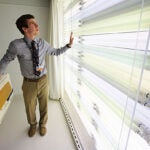 With the discovery of a compound that can slow the degradation of insulin in animals, scientists at Harvard have opened the door to a potential new treatment for diabetes.

The new approach, described by David Liu, professor of chemistry and chemical biology, and Alan Saghatelian, associate professor of chemistry and chemical biology, uses the compound to inhibit insulin-degrading enzyme (IDE). Inhibiting IDE in mice, they have shown, elevates insulin levels and promotes insulin signaling in vivo. Eventually, using this compound in patients may help maintain higher insulin levels to improve glucose tolerance and thereby treat diabetes. The discovery of the compound, and tests demonstrating its efficacy in mice, are outlined in a May 21 paper in the journal Nature.

“This work validates a new potential target for the treatment of diabetes,” Liu said. “What we show is that inhibiting IDE in an animal can improve glucose tolerance under conditions that mimic the intake of a meal if you administer this compound beforehand.”

“What’s been missing has been the ability to regulate the degradation of insulin,” Saghatelian said. “The technological leap we’ve made was in identifying a molecule that allows that to happen. This opens up a new avenue to control insulin signaling in vivo.”

To identify the new molecule, Liu, Saghatelian, and their co-workers turned to DNA-templated synthesis, a method of creating molecules that self-assemble according to an attached DNA sequence. The system works by combining DNA “templates,” or short segments of DNA, with the chemical building blocks of molecules, each of which is linked to a complementary piece of DNA. As the DNA segments bind, the building blocks are brought together and react with one another, forming molecules of greater complexity. The composition of the resulting molecules can be identified by sequencing their associated DNA strands.

“We took a library of about 14,000 DNA templates and combined it with several sets of DNA-linked reagents,” Liu said. “The resulting synthesis of about 14,000 small molecules was largely driven by, and programmed by, DNA base pairing. At the end of that process, we had 14,000 strands of DNA, each with a unique compound at its end.”

Researchers then took that library of DNA-linked compounds and incubated it with IDE in the hope that some might bind to the enzyme.

“Our hypothesis was that the molecules that were retained by IDE might modulate IDE’s activity,” Liu said. “In this case, right out of the library, we found quite a potent and selective inhibitor.  Perhaps most important, this molecule had a good half-life in animals, so it could be used to answer the 60-year-old question of what happens when you slow down the natural degradation of insulin in the body.”

Identifying a molecule that could inhibit IDE, however, was only the first step.

Researchers were also able to show that the compound remained active in the body, and experiments with mice showed that it was able to help regulate blood-sugar levels.

“To validate that this strategy of slowing the degradation of insulin is actually therapeutically useful, we have to show that this compound can transiently inhibit the target, and show that it has a benefit in animals,” Liu said. “That is what we demonstrate in this study.”

In addition to pointing the way toward a new way to treat diabetes, researchers uncovered information about how IDE works in the body.

“In the process of resolving some seemingly paradoxical results, we discovered that IDE is actually somewhat misnamed,” he said. “It doesn’t just degrade insulin, it degrades at least two other important glucose-regulating peptide hormones, glucagon and amylin.”

While the discovery of the molecule is exciting, Liu emphasized that it may still be some time before the compound finds its way onto pharmacy shelves.

“To develop a drug requires a number of additional tests and developments,” he said. “But this work validates IDE as a new target for the treatment of diabetes, and it provides experimental tools that can be used to develop this compound further into potential therapeutic leads.”

“What this paper has done is given a proof of concept that targeting this protein is the way to go,” Saghatelian said. “To make the leap from this molecule to a drug, there are other factors that need to be optimized. But we’ve hung the carrot out there for the pharmaceutical industry and other labs to start looking at IDE as a potential target for treating diabetes, and to push through the remaining obstacles that are there. We’ve shown it’s worth the effort to look into this more deeply, and hopefully what we’ve done is opened people’s eyes to IDE as a valid therapeutic target.”