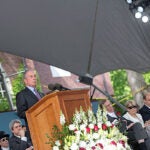 The Science Center Plaza was packed with the nearly 400 Cambridge eighth-graders on a recent morning. The students were on the Harvard campus to celebrate their partnership with the School of Engineering and Applied Sciences (SEAS), and to present their final science and engineering projects.

The Student Science and Engineering Showcase brought together faculty and students from both the city and the University to highlight the projects, and to give students a feel of College life. Cambridge Mayor David Maher said the relationship was vital to the continued success of young students.

“It’s great to be here with all our friends at Harvard who do so much to build strong connections in this community with Cambridge kids,” he said. “That’s what today is all about … we’re so proud of the great work and collaboration at Harvard, and the work that’s happening here with all of you.”

“We have one of the most enlightened cities in the country for the sciences, engineering, the arts, and culture,” said Kevin Casey, acting vice president for Harvard Public Affairs and Communications. “This city understands that the only way for all of those to come together and make progress is when all of those fields work together.”

Superintendent of Cambridge Public Schools Jeffrey Young told students to think of Harvard not just as a local resource, but also as a potential destination. Harvard’s incoming freshman class includes 18 students from Cambridge, 11 of them from Cambridge Rindge and Latin.

“Some of you will end up going to school here,” he said. “This is where you are going to be. And when you get here, you are going to be ready to do your absolute best partly because of the work you did at Cambridge Public Schools. All of you really are young scientists, and I’m excited to see the work you’ve been doing.”

The showcase, in its fourth year, is among the initiatives generated by the ongoing collaboration between Kathryn Hollar, the director of educational programs at SEAS, and Lisa Scolaro, the coordinator of science programs for Cambridge Public Schools.

Hundreds of experiments were on display, and students were eager to present their findings. Caroline Workman, Jackson Hardin, and Gabriel Colburn, all of the Vassal Lane Upper School, demonstrated their hovercraft experiment, which relied on materials such as a leaf blower, plywood, a shower curtain, and — of course — duct tape. The model worked, successfully lifting more than the team’s goal of 100 pounds. Radius of movement proved a bit trickier.

“Our model uses an electric leaf blower,” Workman said, pointing out that “a gas leaf blower might be a little dangerous.”

SEAS Dean Cherry Murray, John A. and Elizabeth S. Armstrong Professor of Engineering and Applied Sciences, welcomed students to campus and specifically encouraged young women like Workman to pursue a career in the sciences. She said that when she was in eighth grade, her older brother mocked her dream of studying physics at MIT, driving her to prove him wrong.

His dismissal “just flipped a switch in me,” she said. “So I applied, and I got in.” She advised the young women in the audience to do the same, adding that there is no better place to become a scientist than in Cambridge, “the center of science and engineering in the universe.”