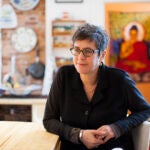 At the time when the apostle Paul was writing the letters that would become some of the earliest texts in the Christian scriptures, the world was “full of gods … almost a forest of statues,” according to Laura Nasrallah, professor of New Testament and early Christianity at the Harvard Divinity School.

In addition to the Roman pantheon, in a move that elevated the power of the state and encouraged the faith of the masses, political leaders were often deified after their deaths — and all were on show in public statuary.

“You really met a god on every street corner,” Nasrallah said.

Understanding that Roman world of multiple gods, many cultures, political oppression, slavery, and economic inequality is critical to any in-depth appreciation of these earliest Christian texts, Nasrallah told a crowd of more than 60 members of the greater Allston-Brighton community at the Harvard Allston Education Portal.

During her May 14 discussion, she encouraged the audience to consider the historical epistles in their cultural context — an effort she explores in “Letters of Paul,” a Harvard X course with more than 22,000 learners worldwide.

“The letters of Paul are still relevant today: liturgically, as Western classics, and as ways of thinking about politics, ethnicity, or equality,” she said. “But it’s important to understand these letters as strangers” before accepting them as friends — to “puzzle out the meaning” of what Paul, and others like him, were trying to say, she said.

“If there’s anyone who represents the threading together of important perspectives in new and creative ways to transform our view of the New Testament of early Christianity, it would be Laura,” said Robert A. Lue, professor of the practice of molecular and cellular biology, faculty director of the Ed Portal, and faculty director of HarvardX. “She investigates how these texts have had an impact not only on religious communities, but also the political landscape.”

Nasrallah’s talk was part of HarvardX for Allston, an educational initiative that brings HarvardX content to the community with the added component of face-to-face interactions and discussion. It’s been a hit with the community; one Allston resident at the lecture, Mark Yoder, was a repeat visitor to the faculty series.

“She did a very good job of trying to isolate some beginning, key topics,” he said of Nasrallah’s talk. “The questions that she’s raised and what she’s talking about are important issues. It was great.”

“It’s a great thing for Harvard to direct its resources to make the richness of our world more accessible to the community, to provide spaces where members of those communities can enter into that scholarly debate quite smoothly,” Nasrallah said.