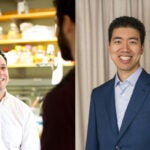 If there’s one thing couples contemplating starting families later in life should keep in mind, it’s that despite advances in fertility technology in recent decades, there are still no guarantees.

Experts on a panel Wednesday at the Harvard School of Public Health said media reports of women giving birth at age 45 or 50 might perpetuate a misperception that getting pregnant when you’re older is easy and that there are no consequences to delaying the start of a family.

The reality is a rapid decline in fertility from a woman’s early 30s, when the chances of conceiving during a single menstrual cycle are 15 to 25 percent, to her mid-40s, when the chances are just 1 or 2 percent, said Jeffrey Ecker, a professor of obstetrics, gynecology, and reproductive biology at Harvard Medical School.

“People plan pregnancy for this time in life,” Ecker said. “[Getting pregnant] doesn’t always happen this way, and becomes less likely as you get older.”

Older women are more likely to require fertility technology, including using donor eggs. Older mothers have higher rates of gestational diabetes and high blood pressure, which can cause premature births. Infants born prematurely have a higher risk of several complications, including attention-deficit/hyperactivity disorder, asthma, and genetic issues such as the chromosomal abnormalities that lead to Down syndrome. Rates of miscarriage and cesarean deliveries are also higher among older pregnant women.

Despite the complications, many more women are delaying having children than did several decades ago. A recent government report found a ninefold increase in first births among women age 35 and older since the early 1970s.

That increase has changed the face of the older mother, according to Marie McCormick, a professor of maternal and child health at HSPH. Decades ago, later-in-life mothers tended to be lower-income women who had already had several children. Today, they are increasingly middle-class professionals who have delayed starting a family to devote time to their careers.

Panelists spoke during a webcast of The Forum at Harvard School of Public Health, “Delaying Pregnancy and Parenthood: The Risks and Rewards.” The event, sponsored by the Harvard School of Public Health, WGBH, and Public Radio International’s “The World,” explored the ramifications of the trends identified by the report, released this month by the National Center for Health Statistics.

Ecker and McCormick were joined by Alison Earle, a visiting scholar at Brandeis University, and I. Glenn Cohen, co-director of Harvard Law School’s Petrie-Flom Center for Health Law Policy, Biotechnology, and Bioethics. The discussion was moderated by Carol Hills, a senior producer and reporter for “The World.”

While highlighting the heightened risks of parenting late in life, panelists stressed that risks are far from certainties, and that many babies born to older mothers are healthy and develop normally.

The panel explored the use of various fertility technologies, including in-vitro fertilization, in which eggs are fertilized in the lab and then implanted in the womb. They also looked at the newer technology of freezing eggs for use later in life, a strategy recently approved for women undergoing cancer treatment.

The trend toward having children later in life is not just a medical matter but a social one as well, Earle pointed out. First, parents starting families older tend to have fewer children. That means there are fewer caregivers in the family to care for aging parents. On a society-wide basis, it means fewer working young supporting more elderly.

“Implications from the trends are potentially significant,” Earle said.

Cohen raised the possibility of dramatic changes to families in the middle class, where the trend is most pronounced. Parents having children at older ages will be grandparents for fewer years, if at all, he pointed out.

“You’re talking about a world without grandparents. That’s a profoundly different world than we’ve been in.”