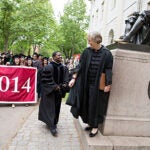 Now, twins Rosh and Roshan Sethi are diverging on their future specialties

When Rosh and Roshan Sethi were small, their mother used to bring them to work with her. A physician, her days were long. The boys, fraternal twins born minutes apart, would bring sleeping bags and nap under her desk.

Today, the two are still together, preparing to graduate from Harvard Medical School and contemplating futures in clinics of their own.

“It’s just like no other profession, in terms of what you get to do — like science, like stories, like people.” Roshan said. “You just learn a lot about the world through medicine. You meet all kinds of people who’ve had all kinds of lives.”

“I can’t pinpoint early on why I wanted to be a surgeon, but to me it was just a unique way to impact a patient’s life,” Rosh said. “Especially for ENT [ear, nose, and throat surgery], it’s a very big impact on a patient’s quality of life, which was important to me.”

The twins were in the same classes through grade school and high school and attended Yale University as undergraduates, rooming together for two of their four years. Today, they share an apartment in Brookline, and they’ll continue to live together during this next phase of training.

They also were together during a time both recall as influential. As teenagers, they volunteered at a local cancer clinic near their hometown of Calgary, Canada. They pushed a cart through the palliative care ward, serving high tea on fine china to patients undergoing cancer treatment. Neither had met patients with cancer before.

The experience influenced Roshan’s interest in cancer medicine and Rosh’s in head and neck surgery, which can be employed in cancer care.

They took similar trajectories through medical school, with each taking time off to expand their horizons, though in different directions. Rosh spent a year at the Harvard School of Public Health, earning a master’s in public health, and worked with David Roberson at Boston Children’s Hospital on a quality-improvement collaborative around tracheostomy care.

HMS Dean for Students Nancy Oriol, the Family Van’s founder, said that Rosh’s essay reflecting on his experience there caught her eye. In it, Rosh said that the van program taught him that even though cases are handled by following medical routines and specific technical steps, each case is a person first, with whom one must connect to build trust. Oriol spoke with him recently and, although the crush of medical school can cause once-meaningful experiences to fade over time, Rosh told her that the Family Van’s lesson was one he has carried with him.

“The common element [among students working on the Family Van] is that they want to take care of patients,” Oriol said. “They’re both excellent students. They’ve been fantastic from the beginning.”

Roshan spent a year on a Doris Duke Fellowship conducting research at MGH, traveled to Rwanda to work with the nonprofit Partners In Health, and has been exercising his writing chops working with Amy Holden Jones, creator of the ABC television series “Black Box” about a neurologist secretly dealing with bipolar disorder. Roshan has served as a medical consultant on some of the episodes for its premier season, and said he enjoyed the experience enough to keep writing, though he doesn’t see that as ever supplanting medicine as a career.

Roshan conducted research in the lab of Shannon MacDonald, assistant professor of radiation oncology at MGH and Harvard Medical School. She said it was a pleasure to work with him and play a part in his professional development.

“Roshan possesses all of the attributes you could hope for in young physician: compassion, intelligence, true excitement for the field of medicine, a hunger for learning, and, despite his many talents, humility,” MacDonald said.  “Roshan will touch many lives in a positive way regardless of what he ultimately chooses to pursue in his career.”