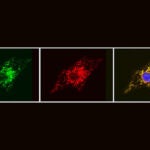 It could be that the key to being a better parent is all in your head, Harvard researchers say.

In a study in mice, Catherine Dulac, the Higgins Professor of Molecular and Cellular Biology and a Howard Hughes investigator, has pinpointed galanin neurons in the brain’s medial preoptic area (MPOA) that appear to regulate parental behavior. If similar neurons are at work in humans, it could offer clues to the treatment of conditions such as postpartum depression. The study is described in a May 15 paper published in Nature.

“If you look across different animal species, there are some species in which the father contributes to caring for the young — sometimes the work is divided equally, sometimes the father does most of the work — and there are species in which the father does nothing,” Dulac said. “The essential question is: Where is that variability coming from? We may be tempted to say that the mom has the neurons required to engage in parental behavior, and dads don’t — this paper shows that’s wrong.”

Using genetic tools, graduate student Herbert Wu and other researchers in Dulac’s lab were able to activate galanin neurons in virgin males, and the results were startling.

Rather than attacking pups, the males immediately began to groom them. Other tests that killed the neurons resulted in parents that ignored the pups altogether or virgin females that behaved like males, attacking the pups.

“We came to the conclusion that what the VNO was doing in the female was repressing male-like behavior,” Dulac said. “If there is a repression of that behavior in females … we wondered if there might be a parallel system — if there are neurons in males that might drive female-like behavior, which normally are repressed.”

While the discovery of galanin neurons in the medial preoptic area suggests the answer is yes, it also raised other questions — particularly why the neurons would be present in males if they aren’t used.

What researchers found, Dulac said, is that those neurons, in fact, are used, but only after the male has mated, and they don’t become fully active until three weeks — the exact gestation period of mice pups — after mating occurs.

“The dad won’t kill the pups after three weeks, because they may very well be his own offspring,” Dulac said. “Even if you remove males immediately after mating and segregate them from females, it’s very striking — half of them will behave paternally after three weeks. Simply mating seems to trigger some sort of clock, and that leads to paternal behavior.”

Though it’s not yet clear whether similar neural pathways exist in humans, researchers say galanin neurons are concentrated in a brain region responsible for many innate behaviors, such as feeding and sleep, and that other neurons in the region have been shown to be conserved from mice across many mammal species, including humans.

“I would be extremely surprised if these neurons did not exist in humans,” Dulac said. “What does that mean? It says that mothers can do it, and fathers can do it. What is really interesting, I think, is you now have an instinctive behavior — and a very important social behavior — and we have access to how it’s being regulated.”

Understanding how parental behavior is regulated, Dulac said, opens the door to a greater understanding of how that behavior can break down.

“It is known that postpartum depression has a very close association with stress levels, particularly among first-time mothers,” Dulac said. “One interesting hypothesis is that these galanin neurons in the MPOA have stress hormone receptors that can inhibit their function. These are the type of questions we can now address directly, because we know which neurons are controlling parental behavior.”

Areas that demand further study, Dulac said, include understanding how galanin neurons are connected to brain centers involved in motivation, stress, and reward; how — and whether — genes associated with the neurons are expressed differently in males and females; and what is happening in male brains in the three weeks after mating.

“Parental behavior is many things,” Dulac said. “It’s grooming, it’s building a nest, it’s protecting the pups — the male is able to do all of those. What this says is that in the male brain, they have the neurons to be paternal, but somehow those neurons are repressed. But we can now say, yes, dads can do it.”