Moving on to the military 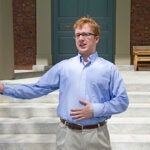 As he waited for the proceedings to begin, Marine Corps 2nd Lt. James S. Brooks of Baltimore posed for pictures with his family next to Memorial Church and reflected on the occasion and his decision to join the military.

The ceremony, he said, “means everything to me. My grandfathers are the reason I first thought about serving. … They are role models to me. I wanted to be like them. That’s why I decided to join.”

His grandfather James S. Smith ’49, who served in the Navy during the Korean War, pinned the bars on Brooks’ uniform during the ceremony.

New Navy ensigns include Christopher J. Curtis, a Near Eastern languages and civilizations concentrator and San Diego native who will return there for his first assignment, and Catherine M. Philbin, an environmental engineering concentrator from Evergreen, Colo., who will be assigned to the USS Chancellorsville in San Diego.

During the ceremony, guest speaker Gen. Darren W. McDew, head of the Air Mobility Command at Scott Air Force Base in Illinois, thanked Harvard President Drew Faust for fostering an inclusive atmosphere toward the military and for her efforts to bring ROTC back to campus after a 40-year absence. McDew also thanked the commissioning class of 2014 “for your service and what you will do for our nation.”

“You will lead in interesting times. You have a great opportunity to shape and better our military,” said McDew, who urged the new officers to live by core military values that include honor, integrity, and selfless service.

“As you continue to refine the kind of leader you are, decide who it is right now, and then be it every single day. Not in moments of convenience, not when you feel like it, not in the things you enjoy … every day.”

Faust recalled the hundreds of former Harvard students who died in World War I and whose names and memories are preserved in the Memorial Church. She also recounted the words of Capt. Constant Cordier, commander of the new 1,000-student Harvard Regiment, precursor of the Army ROTC, who said in 1916: “In all this land, there is no better material for officers than is found in the student body of Harvard.”

“With your commissioning today, you become part of that tradition,” said Faust. “You will honor the service and sacrifice of those who came before you through your own commitment.”