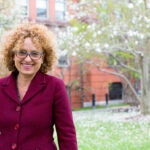 Teller, the shorter half of the magic duo Penn & Teller, is famous for his laconic performances. It’s a quirky hallmark of the offbeat act that Teller remains silent during even the most raucous routines. But away from the spotlight, Teller likes to talk.

On a recent afternoon, on the phone from Las Vegas, where the two-man show has been running for 13 years, the illusionist had plenty to say about co-directing a magic-inspired version of William Shakespeare’s “The Tempest,” with playwright and director Aaron Posner.

“By means of magic tricks, we want the audience to get the same kind of gobsmacked amazement as the characters” said Teller, who helped to oversee a recent four-week run of the show under the big top in Las Vegas. The play opens this weekend at the American Repertory Theater (A.R.T.) and runs through June 15.

Captivating magic tricks aren’t the only twists in the production. The work, which the pair also adapted, includes a haunting soundtrack of songs by Tom Waits and Kathleen Brennan performed by a live band, and choreography by Pilobolus, the company famous for melding acrobatics and dance.

Frequent collaborators, Posner and Teller first worked on “A Midsummer Night’s Dream” several yeas ago. Next, they took on “Macbeth.” Staging “The Scottish Play” was a lifelong dream for Teller, but initially Posner wasn’t interested. The productions he’d seen were “overblown or overly important,” he said, and he found the story uninteresting until Teller helped him to envision it as a “supernatural horror thriller.” Buckets of mysterious blood, floating daggers, severed heads, witches, and hallucinations all took creepy turns in their popular 2008 production. But every illusion, they insisted, supported the Bard’s underlying tale.

“The magic is always in service to the play,” said Teller. “The idea that things look one way and can be a completely different way is a deep theme in ‘Macbeth,’ and magic is extremely well adapted to that.”

He and Posner are taking that same approach with the “The Tempest,” incorporating illusions, tricks, and slights of hand to help the audience feel the wonder experienced by the characters on the stage.

“The tricks are fabulously interesting and enjoyable,” said Posner, “but it’s what it does to your mind. It’s the way it transports you … when you see things that simply can’t be happening, it does a pretty wonderful thing to your mind. It sort of blows the lid off a little bit. … And that’s what’s happening to the characters in the show.”

For inspiration, the pair turned to a Depression-era, traveling tent-show magician known as Willard the Wizard, who crisscrossed Texas with his company, including his daughter, the star of a well-known levitation trick.

Hoping for a soundtrack that would suit their type of “rough-and-tumble” production, Teller reached out to Waits and his wife and collaborator, Brennan. When Waits spied a picture of Willard’s “shockingly shabby band,” he told Teller simply, “These are my people.” So Waits offered up access to a collection of his and Brennan’s work.

“This vast catalog includes all sorts of moods, all sorts of contexts,” said Teller. “It covers just about every occasion and every mood within a certain kind of fabulous style.”

Posner calls the show a unique hybrid, a “fully embodied Shakespeare play” that is at once a concert, a magic show, and a work completely in step with the Bard’s original intent. “This isn’t one of the ones where a simple, stripped-down, bare-bones production necessarily is your friend,” said Posner. “This is one where actually more might be more, and that’s where I think Shakespeare was going … I think he was putting out a kind of large, theatrical tent, and we tried to match that.”

Thought to be the last work Shakespeare wrote alone, “The Tempest” showcases revenge, redemption, and forgiveness. The action unfolds on an island that is home to the play’s protagonist, the powerful magician Prospero; his daughter, Miranda; and several spirits and goddesses. The island also is briefly a refuge for a group of shipwrecked aristocrats.

The fantastical play resonates deeply with both directors. As a new father, Posner said he relates to Prospero’s love for his child and his desire to secure her happiness at all costs. For 66-year-old Teller, the notion of a magician relinquishing his craft is captivating.

“A big part of this show comes from my recognition that at some point I will have to give up magic … It asks the question ‘What would it take in your life to make you give up the thing that makes you you?’”

Another twist in their reimagined production involves the character Caliban, the son of an evil witch who is enslaved by Prospero. Looking to create an original type of monster without makeup tricks or masks, Teller and Posner turned to Pilobolus, whose members suggested several people play the role simultaneously. The final version involves two actors connected to each other throughout the show who move around the stage in  “eerie, four-legged ways that are fluid and strange,” said Teller.

For the rest of the surprises — including a creepy dinner table, vanishing cast members, and some nifty card tricks — people will simply have to buy a ticket.