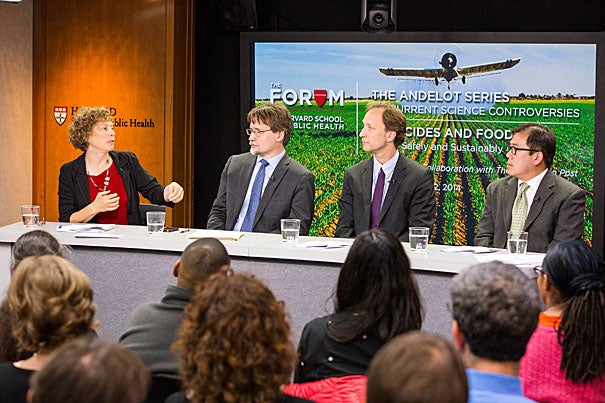 Search the whole world over, and you would be hard pressed to find one person who could do each of these: run 100 meters in 11.84 seconds, design a public park, identify the native plants of North America, chat in Ukrainian, pole vault, bake a cake that looks like a watering can, recite plot lines from both “Downton Abbey” and “The Walking Dead,” and win $20,000 on the game show “Wheel of Fortune.”

But there is such a person: Natalia Gaerlan, a daughter of immigrants from Ukraine, who is graduating from Harvard with a master’s degree in urban planning from the Graduate School of Design (GSD). Married and the mother of 9-year-old Malaya, she is a landscape architect whose early enjoyment of small-scale community spaces blossomed into an interest in planning at the scale of cities. “We can shape these places,” said Gaerlan of a realization she had. “Someone has created all this.”

Her first dream was to be a physical therapist, inspired by an athletic girlhood in suburban Detroit. (She left Regina High School with nine school records in track and field.) But while training for sprints as an independent runner in Michigan, she met James Gaerlan, a molecular biologist who coaches elite and Olympic athletes. Away from the track, he helped her see what her true interests were, she said: plants, gardens, and designed landscapes. Gaerlan moved west and earned a bachelor’s degree in landscape architecture at University of California, Davis, in 2002, the year she married James.

He encouraged Gaerlan in track and field, a sport that gave her desire, discipline, and perspective. (She likes to say “Push past comfort zones.”) In 2008, during the International Association for Ultra Multievents competition in Germany, she became women’s world champion in the tetra decathlon: 14 events over two days, starting with the 100-meter hurdles and ending with a 3-kilometer run. Gaerlan still works out, she said, twice every day. She never competed for Harvard, but her personal bests in the 200 meters (23.86 seconds) and the long jump (20 feet and one-half inches) top the University records.

At the GSD, Gaerlan became intrigued by coastal cities in developing countries that will be hardest hit in an era of rising seas, stronger storm surges, fiercer floods, and other consequences of climate change. She arrived at Harvard in the fall of 2012, and three dramatic events marked her first year: Hurricane Sandy (October), winter storm Nemo (February), and the Boston Marathon bombings (April). “It made me think more about disasters,” natural and otherwise, she said. As for climate change concerns internationally, Gaerlan asked, “How do you protect these large coastal cities that continue to grow and expand?”

To help answer such questions, at the GSD she has studied risk and resilience, including green infrastructure mitigations such as wetland buffers, barrier islands, and sand dune restorations.

The idea, said Gaerlan, is to design cities with “resilient, adaptive architecture” that works in concert with traditional infrastructure like seawalls. “A little bit of both is probably best,” she said. “It’s not just going to take a landscape architect or a planner or an engineer to fix a problem. If you only look through the eyes of one discipline, you miss a lot of issues.”

Gaerlan did fieldwork in the Philippines and Thailand both before and during her time at Harvard. These “awakening” trips offered another lesson, she said: Look for solutions through the eyes of the people affected. During three months in Bangkok last summer, working for the United Nations, Gaerlan was impressed with how poor residents in unprotected parts of the city had gotten themselves ready for a catastrophic flood in 2011.

“They prepared on their own,” she said, building footbridges to the highlands, stockpiling food, setting up cooking stations, moving household electrical outlets higher, making sure key players had boats, and knowing who was elderly or sick.

After Harvard, Gaerlan hopes to earn a Fulbright scholarship to spend nine months surveying how the poor perceive housing materials in the disaster-prone Philippines. The goal fits her life motto of pushing past comfort zones. Lovingly, she wishes the same for Malaya, who has already skipped two grades, swims, dives, plays soccer, and studies piano and guitar.

“I want to teach her,” said Gaerlan, “to always dream big.”