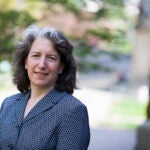 In speech to alumni in N.Y., Faust recalls challenges met, and outlines daunting ones ahead

NEW YORK — Amid the smoke and flames of kamikaze attacks on the USS Intrepid during World War II, Harvard graduate Charles Devens led firefighting crews that saved the ship. Amid the smoke and fire of last year’s Boston Marathon bombings, Harvard Business School student and U.S. Army Col. Everett Spain ran toward the chaos and helped save three victims with horrible wounds.

Leadership under fire and decision-making under stress were invoked, praised, and perhaps slightly demystified on Wednesday evening during an event that brought 600 University alumni a taste of Harvard’s campus today, even as it urged them to consider the Harvard of tomorrow.

“Lt. Devens led,” said Harvard President Drew Faust, whose speech described his and Spain’s heroics. “Amidst fire and smoke and explosions, he led. Amidst uncertainty and danger, he led. Like so many Harvard men and women before and after him, he led. It is one of the most enduring legacies of the institution entrusted to us: a history of leadership, of leading in the face of challenge and change.”

The event, which took place on New York City’s Hudson River waterfront aboard the Intrepid (which is now the centerpiece of the Intrepid Sea, Air, and Space Museum), featured a speech about Harvard past, present, and future by Faust, and a discussion with two Harvard faculty experts about decision-making, behavioral “nudges,” and distraction’s effects on IQ.

The event was the latest in the “Your Harvard” series, which augments The Harvard Campaign to connect alumni with some of the University’s cutting-edge thinking and to frame the challenges Harvard faces in a changing world amid the shifting landscape of higher education. The session was co-sponsored by the Harvard Alumni Association and the Harvard Club of New York City, and also featured welcoming remarks by Harvard Alumni Association President Catherine Gellert.

“The Your Harvard series has been a wonderful chance to bring alumni communities together and give them a glimpse of what is happening on campus today, as well as share President Faust’s vision for the future,” said Gellert.

“The questions that the Harvard Campaign seeks to answer are anchored in this legacy of leadership and service,” Faust said. “How do we lead in the face of challenge and change? How do we sustain Harvard’s commitment to leadership in an unsettled environment for higher education, and in a rapidly changing world? How do we propel Harvard into new opportunities and help forge leaders and craft solutions for the future we share?”

Faust’s speech provided a glimpse at Harvard leaders’ vision of the campus of tomorrow. She addressed the opportunities presented by today’s cross-cutting global issues whose solutions require interdisciplinary collaboration, such as finding a cure for malaria, and the challenges presented by the advent of technology that can alter how classes are taught on campus even as it extends faculty members’ reach to students around the world.

She spoke of the need to continue to attract the most talented faculty and the best students, regardless of economic background, and of financial aid’s key role in that effort. She said that, in an ever more tightly connected world, Harvard will continue to move from “inherently global to intentionally global” because “students and faculty must understand their lives and work within the broadest context.” Faust also addressed the importance of renewing Harvard’s physical campus, with an eye toward common spaces that foster the casual but critical interactions that make residential living so important and that are embodied in the Science Center Plaza and the new Smith Campus Center. She spoke of the promise presented by Harvard’s Allston property, which will be the site of a new home for the School of Engineering and Applied Sciences; of renewing Harvard’s cherished residential Houses; and of the importance of ensuring that liberal arts education is not lost in a world increasingly focused on college’s payback and payoff.

“If Harvard is truly committed to educating leaders and serving society, then we must reaffirm and deepen our commitment to the liberal arts,” Faust said. “Technology offers magnificent tools, but how shall we use them? How do we know what is true? What is good? What is just? How do we nurture the imagination that kindles innovation and change? How do we understand ourselves, our values, our common humanity in a world that at once seems flat yet at the same time is shaped and often shaken by its contrasts and differences?”

The panel discussion featured Cass Sunstein, the Robert Walmsley University Professor and co-author of the book “Nudge,” and economics Professor Sendhil Mullainathan, author of the book “Scarcity: Why Having Too Little Means So Much,” on how shortages affect decision-making. It was moderated by Chrystia Freeland ’90, journalist, author, and current member of Canada’s Parliament.

In response to Freeland’s questions, Sunstein said that institutions can and should actively try to shape citizens’ choices, offering “nudges” that use the latest understanding of behavior and psychology to weight choices in beneficial directions. For example, he said, the government requires warnings about the health consequences of smoking on cigarette packages, but still allows citizens to smoke. It provides tax incentives for retirement savings that can make people’s post-work years more comfortable, but doesn’t require those savings beyond mandatory Social Security contributions. It requires new cars in dealerships to display their mileage, but doesn’t require people to buy fuel-efficient cars.

Such nudges are needed, Sunstein said, because people in real life are not the rational actors they aspire to be. Instead, they tend to have a bias toward optimism, one that discounts risks and puts more value on things today than in the future.

When that bandwidth is stretched too far, IQs actually can decline, he said. This has been illustrated by studies of college students studying all night before tests or while writing important papers. Such all-nighters, Mullainathan said, actually lower the average student’s IQ by 13 points. Poverty’s impact on decision-making is similar, he said, because the constant stress of worrying about paying the rent or buying enough food uses up intellectual bandwidth.

This process also applies to something as mundane and widespread as dieting. Because dieters are constantly weighing choices about food, their decision-making is affected because intellectual bandwidth it consumes is not available for other concerns.

“It’s really true. On those days when I have a lot going on, I’m actually dumber,” Mullainathan said.

Mullainathan addressed how the latest thinking in this field can be used to create fault-tolerant systems. That movement got its start in the design of bomber aircraft cockpits, when crashes began to mount because pilots, despite extensive training, were sometimes retracting the landing gear after touching down. It turned out that the handle for the plane’s flaps was next to and identical to the one for landing gear.

That prompted a move to redesign cockpits to support pilot decision-making and minimize errors. Similar thinking, Mullainathan said, can be applied to today’s institutions, making them more fault-tolerant for users. Colleges, for example, are not fault-tolerant, Mullainathan said. Students who miss a class fall behind and have more difficulty in later classes. Miss a second class, and they may consider dropping out. A fault-tolerant school could be designed that would have different sections of the same class starting on a staggered schedule, so that a student who misses one class can move to another section and not miss the material.

“We all know that, in our lives, there are so many times when we are completely incentivized [to make the right decision], but we just screwed up, so I think [we should be] rethinking what it means to have policy that is fault-tolerant,” Mullainathan said.