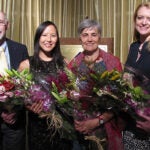 Coming to the United States as a young boy, Tianhao He ’15 quickly learned about the many opportunities this country can provide, while also becoming aware of its many inequities.

It was then that He chose to make it his life’s work to make sure more Americans have the opportunity to succeed and thrive.

Because of this dedication to public service, and his leadership potential, the Harvard undergraduate was named a 2014 Truman Scholar. The award, which provides up to $30,000 toward graduate school, is given annually to college juniors who exhibit leadership qualities and are committed to a career in public service. He was one of only 59 chosen from 655 candidates nationwide who had been nominated by their schools for the scholarship.

“I am incredibly honored and humbled by this opportunity. Above all, being a Truman Scholar means being a part of a community, a community where I can not only contribute my own perspectives but also listen and learn from other Truman Scholars who are doing incredible work in other fields,” said He.

A resident of Mather House and a sociology concentrator, He works at the Harvard Legal Aid Bureau’s Eviction Defense Clinic, where he helps Harvard Law School student advocates provide low-income families from Boston with the legal resources to stay in their homes. In addition, He mentors students through the Harvard Allston Education Portal, and is the director of content for the Harvard International Review, a quarterly journal focused on international affairs.

“It’s wonderful to hear that the Truman Foundation has chosen to honor one of our undergraduates for his dedication to public service and his leadership. I want to congratulate and thank Tianhao for this tremendous achievement,” said Interim Dean of the College Donald Pfister. “Tianhao is truly a reminder that many of our undergraduates are doing extraordinary things in the name of public service.”

Born in Beijing, He moved to Switzerland before arriving in Cambridge, where he stayed through eighth grade before moving to Maryland. There, close to the nation’s capital, his enthusiasm for public service grew. Feeding this passion, He has conducted original public policy research on affordable housing and its effect on urban economic inequality in Boston.

“For me, as an immigrant, I saw that opportunity in this country could still be transformative, but I also saw firsthand that there are many structural barriers that continue to perpetuate economic inequality in this country,” He said. “I saw how neighborhoods mattered, and how where you live can still determine so many of your life chances. When I got to Harvard, my incredible mentors and the interdisciplinary resources here on campus inspired me to think more critically about why these problems exist and how I can make an impact through a career in public service.”

This summer, He will intern at the White House with the Domestic Policy Council’s Office of Urban Affairs and Economic Mobility and the Office of Veterans and Military Families. Though He is only a junior, he plans to return to Washington, D.C., after graduation to put his desire to help others to use by working for the federal government. Eventually, He intends to go to law school.

“I don’t see the problems with government as a reason to turn away, but rather as an opportunity to turn towards, get involved, and reimagine how we can solve these problems,” He said. “Through my involvement with the Harvard Legal Aid Bureau, I have seen firsthand Harvard Law School’s genuine commitment to clinical legal education, which has inspired me to want to go to law school myself because I have seen how law can be a powerful tool with which to solve the social problems I have studied as an undergraduate sociology concentrator.”