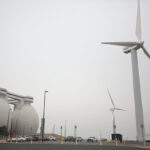 Pesticides have been linked to Parkinson’s disease, declines in cognitive performance, developmental disorders, and attention-deficit/hyperactivity disorder in children. Their application has also been tied to environmental issues, such as the collapse of honeybee colonies and the development of resistant pests and weeds.

But we know surprisingly little about population-wide health effects of the low doses that are in the foods we eat every day, panelists at the Harvard School of Public Health said Thursday.

“We can’t tell for sure if you eat a bowl of salad today for lunch if it will lead to cancer in 10 to 20 years,” said Chensheng Lu, an associate professor of environmental exposure biology at the Harvard School of Public Health.

Lu, whose recent research has tracked the mysterious collapse of honeybee colonies to a class of pesticides called neonicotinoids, said that broad studies on the effects of pesticide residue in foods are difficult to do. Funding is hard to attract because there isn’t a specific health impact being investigated. Also, there are daunting challenges to designing a scientifically valid study, stemming from the fact that so much of the population has been raised on foods treated with chemicals.

“Everyone has been exposed to pesticides to some degree,” Lu said.

Lu was joined in the discussion by Marc Weisskopf, an associate professor of environmental and occupational epidemiology at HSPH; Carolyn Dimitri, associate professor of food studies at New York University; and Gary Adamkiewicz, senior research scientist in HSPH’s Department of Environmental Health. The event, “Pesticides and Food: Eating Safely and Sustainably,” was sponsored by HSPH and the Huffington Post and moderated by Philip Hilts, director of the Knight Science Journalism Fellowships at the Massachusetts Institute of Technology.

Weisskopf cited lead exposure, once considered safe at certain levels, as a point of comparison. Understanding of the health effects of pesticides in the food supply is at an early stage, he said, and will likely continue to develop.

Outside the lab, it is difficult for consumers who are being encouraged to eat more fruits and vegetables to determine what is safe to put in their grocery carts. In 2012 a Stanford study found that organic foods were less likely to have pesticide residue, but that both organic and conventionally grown foods are safe to eat. Panelists at HSPH balked at that conclusion, saying that science doesn’t yet know enough about the long-term effects of low doses. The immediate problem facing consumers, Adamkiewicz said, is a lack of transparency about which pesticides are used on foods and how much residue makes its way to the grocery store.

Help arrived recently with the Environmental Working Group’s publication of lists of foods that tested with the most and least pesticides. On the high end were apples, strawberries, grapes, celery, and cucumbers; foods with low pesticide residue included avocados, sweet corn, pineapples, mangoes, kiwis, grapefruit, and eggplant.

Washing food can remove some residue but not all of it, Lu said. Some pesticides are inside, as well as outside, the fruit.

Selecting organically grown produce can also reduce pesticide intake, though its higher cost is an issue for many low- and middle-income families. One possibility for budget-conscious families, Adamkiewicz said, would be to work through the lists of residue in common foods to selectively purchase organic fruits and vegetables.

While pesticide residue is an important aspect of the issue, panelists pointed out that it’s only part of the problem facing those working for a cleaner food supply. At any level, the residue is still the product of an agricultural system whose heavy dependence on pesticides puts workers and the environment at risk.

“There’s a whole system out there beyond the level of the residue on the apple you’re eating,” Adamkiewicz said.