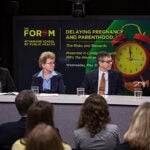 With a master’s from the School of Public Health, physician Darrell Gray hopes to use telecommunications to extend care to underserved neighborhoods

The man came into the emergency room of St. Louis’ Barnes-Jewish Hospital complaining of abdominal pain. Having no insurance, he had avoided medical care as long as he could, but the pain had finally become too intense.

The gastroenterologist called in to consult that day was Darrell Gray, a young physician from Baltimore doing a fellowship at the hospital, which is affiliated with Washington University School of Medicine in St. Louis.

The patient, in his late 40s or early 50s, had blood in his stool and a mass in his stomach.

“It didn’t take much more diagnostic work to understand that, feeling the mass and seeing that his history of passing blood, this was likely a cancer,” Gray recalls. “Here’s a young guy who comes in with what was later found to be metastatic cancer. At that point I really couldn’t do much for him.”

That experience, and others like it, prompted Gray to continue his already extensive training, which included the fellowship, a residency at Duke, and medical school at Howard University. To top that off, he spent the last year at the Harvard School of Public Health (HSPH).

Gray got a taste of public health work during his fellowship. While in St. Louis, he designed a bridge program to connect disadvantaged populations with the health care system. His target population was African-American men, who have a higher incidence of colorectal cancers than the general population, a reality that, in poorer neighborhoods, is compounded by other barriers to health care, such as a lack of insurance, a lack of knowledge about preventive measures, and chronic unemployment.

To reach these men, Gray contacted area churches, gave short educational presentations during the community announcement portion of Sunday services, and followed up with those who contacted him, connecting them with screening services and primary-care physicians. The experience was satisfying, but also made him realize how much he didn’t know.

“I realized from that program that there were some areas I needed strengthening in: health policy, public health, population health,” Gray said. “While I enjoy seeing a patient in the office, I want to be able to impact populations.”

Gray, who graduates this spring with a master’s in public health, said he has benefited greatly from his year at HSPH. In addition to his academic work, he shook hands with the prime minister of Namibia, met with the former health minister of Kenya, met senior White House adviser Valerie Jarrett, and met with Jonathan Woodson, the assistant secretary of defense for health affairs.

“I had high expectations coming in, but it has exceeded my expectations,” said Gray, who is at HSPH on a Mongan Commonwealth Fund Fellowship in Minority Health Policy.

Through his discussion with Woodson, Gray began working on the Defense Department’s “telehealth” initiative, run out of the National Center for Telehealth & Technology. With staff there, Gray evaluated the efficiency and effectiveness of telehealth interventions, in which telecommunications are used to extend the reach of health care professionals to soldiers suffering from traumatic brain injury and psychological issues.

Live video conferencing is a mainstay of the program, but telehealth can also include home monitoring, which is used in disciplines like cardiology, storing images and other information that is then forwarded to other health professionals. There is even consulting on the telephone.

“It’s something novel, that I could use in the future practice of gastroenterology,” Gray said.

Gray grew up in Baltimore, his mother a teacher and father a physician. He recalls accompanying his father as he visited hospitals and clinics, and always being impressed by his father’s rapport with his patients. Since people would thank him for his care, he genuinely seemed to be helping.

After graduating, Gray expects to continue his work linking the medical community to disadvantaged populations through an appointment as an assistant professor at Ohio State University Wexner Medical Center. There, in addition to his clinical duties, he will be director of a new program focusing on community engagement and equity in digestive health.

“I’ll be trying to integrate efforts and ensure we have the community in mind, enhancing programs and working toward equity in health care delivery,” Gray said.

In its video series “Why Public Health?” the Harvard School of Public Health asks students and alumni to talk about what drew them to the field. Physician Darrell Gray, M.P.H. ’14, who is determined to reduce the incidence of colorectal cancer in vulnerable populations, is also working on a project with the U.S. Department of Defense to expand its telehealth services worldwide.