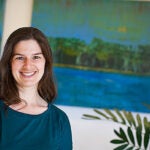 Researchers at the Harvard Stem Cell Institute (HSCI) have shown that a protein, which they previously demonstrated can make failing hearts in aging mice appear more like those of young and healthy mice, similarly improves brain and skeletal muscle function in aging mice.

In two papers released online early today by the journal Science (which will formally publish the papers on Friday), professors Amy Wagers and Lee Rubin of Harvard’s Department of Stem Cell and Regenerative Biology (HSCRB) report that injections of a protein known as GDF11, which is found in humans as well as mice, improved the exercise capability of mice and improved function of the olfactory region of the brains in the older mice.

Rubin and Wagers, who also has a laboratory at the Joslin Diabetes Center, said that, barring unexpected developments, they expect to have GDF11 enter initial human clinical trials within three to five years.

Postdoctoral fellow Lida Katsimpardi is the lead author on the Rubin group’s paper, and fellows Manisha Sinha and Young Jang are the lead authors on the paper from the Wagers group.

The studies examined the effect of GDF11 in two ways. First, they used a parabiotic system, in which two mice are surgically joined and the blood of the younger mouse circulates through the older mouse. Second, they injected the older mice with GDF11, which in an earlier study by Wagers and Richard Lee of Brigham and Women’s Hospital was shown to be sufficient to reverse characteristics of aging in the heart. Lee is also an author on the two new papers.

Doug Melton, co-chair of HSCRB and co-director of HSCI, reacted to the papers’ findings by saying he could not recall “a more exciting finding to come from stem cell science and clever experiments. This should give us all hope for a healthier future.

“We all wonder why we were stronger and mentally more agile when young. And these two unusually exciting papers actually point to a possible answer: the higher levels of the protein GDF11 we have when young. There seems to be little question that, at least in animals, GDF11 has an amazing capacity to restore aging muscle and brain function,” he said.

Melton, Harvard’s Xander University Professor, said the ongoing collaboration among Wagers, a stem cell biologist whose focus has been on muscle, Rubin, a neurobiologist whose focus has been on neurodegenerative diseases and using patient-generated stem cells as targets for drug discoveries, and Lee, a practicing cardiologist and researcher, “is a perfect example of the power of the Harvard Stem Cell Institute as an engine of truly collaborative efforts and discovery, bringing together people with big, unique ideas and expertise in different biological areas.”

As Melton mentioned, GDF11 is naturally found in much higher concentrations in younger mice than in older ones, and raising its level in older mice has improved function of every organ system studied so far.

Wagers first used the parabiotic system in mice 14 years ago as a postdoctoral fellow at Stanford University, when she and colleagues Thomas Rando and Irving Weissman of Stanford, and Irina Conboy of the University of California, Berkeley, observed that the blood of young mice circulating in old mice seemed to have some rejuvenating effects on muscle repair after injury.

Last year, she and Lee published a paper in which they reported that, when exposed to the blood of young mice, the enlarged, weakened hearts of older mice returned to a more youthful size, and their function improved. Working with a Colorado firm, the pair reported that GDF11 was the factor in the blood apparently responsible for the rejuvenating effect. That finding raised hopes that GDF11 may prove, in some form, to be a possible treatment for diastolic heart failure, a condition in the elderly that is irreversible, and fatal.

“From the previous work, it could have seemed that GD11 was heart-specific,” said Wagers, “but this shows that it is active in multiple organs and cell types … Prior studies of skeletal muscle and the parabiotic effect really focused on regenerative biology. Muscle was damaged and assayed on how well it could recover.

“The additional piece is that while prior studies of young blood factors have shown that we achieve restoration of muscle stem cell function, and they repair the muscle better, in this study we also saw repair of DNA damage associated with aging. And we got it in association with recovery of function. And we saw improvements in unmanipulated muscle. Based on other studies, we think that the accumulation of DNA damage in muscle stem cells might reflect an inability of the cells to properly differentiate to make mature muscle cells, which is needed for adequate muscle repair.”

Wagers noted that there is still a great deal to be learned about the mechanics of aging in muscle, and its repair. “I don’t think we fully understand how this is happening or why. We might say that the damage is modification to the genetic material; the genome does have breaks in it. But whether it’s damaging, or a necessary part of repair, we don’t know yet.”

Rubin, who works on developing treatment for neurodegenerative diseases, particularly in children, said that when his group began its GDF11 experiments, “We knew that, in the old mouse, things were bad in the brain, there is a reduced amount of neurogenesis [the development of neurons], and it’s well known that cognition goes down. It wasn’t obvious to me that those things that can be repaired in peripheral tissue could be fixed in the brain.”

Rubin said that Katsimpardi was taught the parabiotic experimental technique by Wagers, but conducted the Rubin group’s experiments independently of the Wagers group, and “she saw an increase in neural stem cells, and saw increased development of blood vessels in the brain.” Rubin said that 3-D reconstruction and magnetic resonance imaging (MRI) of mice brains showed “more new blood vessels and more blood flow, both of which are normally associated with younger, healthier brain tissue.”

Younger mice, Rubin said, “have a keen sense of olfactory discrimination.” They can sense fine differences in odor. “When we tested the young mice, they avoided the smell of mint; the old mice didn’t. But the old mice exposed to the blood of the young mice, and those treated with GDF11, did.

“We think an effect of GDF 11 is the improved vascularity and blood flow, which is associated with increased neurogenesis,” Rubin said. “However, the increased blood flow should have more widespread effects on brain function. We do think that, at least in principle, there will be a way to reverse some of the cognitive decline that takes place during aging, perhaps even with a single protein. It could be that a molecule like GDF 11, or GDF 11 itself, could” reverse much of the damage of aging.

“It isn’t out of the question that GDF11,” or a drug developed from it, “might be capable of slowing some of the cognitive defects associated with Alzheimer’s Disease, a disorder whose main risk factor is aging itself,” Rubin said. It is even possible that this could occur without directly changing the “plaque and tangle burden” that is the pathological hallmark of Alzheimer’s. Thus, a future treatment for this disease might be a combination of a therapeutic treatment that reduces plaques and tangles, such as an antibody directed against the β-amyloid peptide, with a potential cognition enhancer like GDF-11.

Wagers said that the two research groups are in discussions with a venture capital group to obtain funding to “be able to do the additional preclinical work” necessary before taking GDF 11 into human trials.