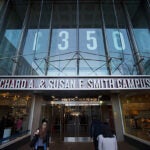 In all shapes and sizes, diplomas of the 17th and 18th centuries provide glimpses of their eras

Early in the afternoon of Sept. 23, 1642 — the first Commencement at Harvard College — all nine graduates lined up in front of President Henry Dunster. He conferred degrees on the group in order of their parents’ prominence, which made Benjamin Woodbridge Harvard’s first graduate. After delivering an address in Latin, Dunster handed each new scholar “a Booke of Arts,” wrote one witness. But after the ceremony, Harvard took each book back.

It was not until 1813 that Harvard College graduates received something at Commencement they could keep: a uniformly sized, textually common diploma in Latin. (Medical diplomas were first given out in 1817, and law diplomas in 1827.) Before the era of printed diplomas, any graduate who needed a document attesting to a Harvard degree (usually for travel overseas) hired a local calligrapher to pen an inscription on parchment. Then he — always “he” in those days — paid the Harvard president to sign it. When it came to 17th- and 18th-century diplomas, you “rolled your own,” wrote historian Samuel Eliot Morison.

Because of this practice, surviving Harvard diplomas from that time come in all shapes and sizes. They have only one thing in common: Latin text, including names and signatures. The first Harvard graduate to have a diploma made was James Ward, a minister’s son who earned his A.B. degree in 1645, despite an earlier public whipping by Dunster for burgling a local residence. He moved to England, and used his Harvard degree to gain admittance to Oxford. The earliest known diploma in the Harvard collections is that of George Alcock, who received his A.B. in 1673. Dated 1676, it is Puritan-plain and conspicuously small, about 10 inches by 6. Many archived examples, however, are elaborately inscribed, fitted with ribbons and seals, and ostentatiously large. For his 1769 A.B., Thomas Kast ordered up a flashy sheepskin 24 inches wide.

None of the 29 Harvard diplomas from those early centuries — despite bursts of fanciful filigree — could be called fine art. Even strictly as documents, they have limited utility for historians since they merely confirm identities and dates of graduation, which were already recorded in the Triennial Catalogs of that era. (The first catalog was printed in 1674 on the press at the Indian College — as a broadside. Not until 1776 was Harvard’s list of graduates large enough to merit a pamphlet.)

But there is undeniable magic to the originals, penned on paper or skin and anchored by the ornate signatures of people from Harvard’s resonant far past. Urian Oakes, Harvard’s fourth president, signed Alcock’s diploma. He steered the College through the bloody years of King Philip’s War. Increase Mather, Harvard’s last resolutely Puritan president, signed his son Samuel’s 1701 master of arts diploma. In 1839, legendary law professor Joseph Story, who taught at Harvard while a justice of the Supreme Court, signed the diploma of LL.B. graduate Henry Mason. So did Harvard President Josiah Quincy III, who had a sound head for business and an iron fist for student discipline.

Vintage diplomas and other Commencement documents may also reflect dramatic historical realities. The Triennial Catalog for 1682, which lists 1665 College graduate Caleb Cheeshahteaumuck as an “Indus,” also reveals the demographic fragility of 17th-century Harvard. There are no graduates listed for 1644, 1648, and 1672, and only one each in 1652 and 1654. (The 17th century produced only 439 graduates, about one-quarter the number of the Class of 2014; of those 17th-century graduates, 132 — 30 percent — died before the onset of the next century.) Soon came the era of “general degree diplomas,” published in lieu of Commencements cancelled because of war, disease, or economic depression. The earliest general diploma at the Harvard University Archives is for 1752, the year of a smallpox outbreak in Boston.

Other diplomas in the Harvard archives signal other kinds of drama, like the one for Gertrude McDonald, whose A.B. was granted in 1894, the first year of the new Radcliffe College. The Schlesinger Library has in its vaults three proofs that women belonged at Harvard all along: the diplomas given to Ruth Lansing — for a bachelor’s degree in 1908, a master’s in 1909, and a Ph.D. in 1914. “It’s not just a piece of paper with a name,” said Schlesinger research librarian Sarah M. Hutcheon of each old diploma. “There’s a story behind it.”