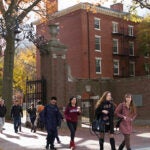 What if health care workers in under-resourced countries could administer a prognostic test on patients in the field, miles from any hospital, simply with a smartphone app?

This is the kind of innovation that the winners of the 2014 President’s Challenge will now be able to bring to thousands, if not millions, of people suffering from diabetic foot ulcers.

The support will be crucial in widening its reach.

“There were so many really great ideas and teams here, I’m just really happy right now,” said Benjamin Brush, a student at Harvard Medical School (HMS) and a member of the VACU Scan team.

“This money will speed up our implementation process,” said team member Richard Lin, also of HMS. “The equipment we can buy, the trials we can perform, the personnel we can hire … this is a game-changer for us.”

Changing the game, or at least advancing possible solutions for some of the world’s greatest problems, has been the focus of the President’s Challenge since its inception three years ago. This year Faust, in collaboration with the Harvard Innovation Lab (i-lab), challenged Harvard students to generate social change by developing entrepreneurial solutions in five categories: education innovation, affordable health, energy and the environment, economic development and sustainable employment, and efficient governing.

Faust was particularly impressed by the range of the competitors — the 130 teams in the challenge came from 12 different Schools at Harvard. “As I walked around and talked with the different teams I so enjoyed asking where they were from and figuring out how in the world these collaborations ever evolved,” she said. “They evolved because this space is here and this space encouraged it and made it happen.”

In March, 10 finalists were announced and the challenge picked up momentum, with teams working at an accelerated clip to build their ideas into viable ventures. Their resources included time and space at the i-lab, $5,000 seed money, and insight from mentors.

The three runners-up from that group were OpportunitySpace, a platform that helps communities find the best uses for public land; Virtudent, a telehealth solution for dentistry; and Giant Otter Technologies, a Web-based, 3-D simulation tool for conflict resolution focused on  school bullying.

“The President’s Challenge process meant so much to us,” said Geoff Marietta, a doctoral student at the Harvard Graduate School of Education and a co-founder of Giant Otter. “We were able to get feedback from the Harvard community about whether this is an idea that should move forward and be scaled. It showed us the validity of our idea.”

The challenge has yielded impressive results. Since winning in 2012, Vaxess, which developed a method of using silk to stabilize vaccines so they can be stored and shipped without refrigeration, has raised $3.75 million in its first round of venture funding. Now established in a new lab in Kendall Square, its team has grown from the original four founders to seven employees.

“The President’s Challenge played a huge role in Vaxess’ success, providing us with initial seed capital to push the technology forward, access to great mentors who worked with us to advance the plan, and pressure from competing against great entrepreneurs, which prepared us to head out into the real world and compete for funding,” said Michael Schrader, who graduated from Harvard Business School in 2012.

Adam La Reau, the founder of finalist One Summit, which helps children with cancer build self-confidence and resilience through the rigors of rock climbing, said the competition spurred him to ask the right questions. “What direction do I want to go? What’s the end state? What’s the impact I’m trying to have and how do we measure it?”

But the toughest test for La Reau, a student at the Kennedy School, was not a business or technological challenge. “It was finding out just how many kids suffer from cancer. This is what inspires you to want it to scale — and scale smart. We want to do it, but do it well, and deliver the impact we set out to deliver.”