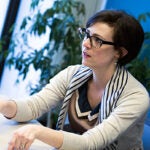 President Faust to present Harvard Medals to alumni for service

First awarded in 1981, the Harvard Medal recognizes extraordinary service to Harvard University. The service can range across diverse aspects of University life — from teaching, leadership, and innovation to fundraising, administration, and volunteerism. Harvard President Drew Faust, the Lincoln Professor of History, will present the medals at the Annual Meeting of the Harvard Alumni Association during Harvard’s 363rd Commencement Afternoon Program.

Anand G. Mahindra’s dedication, generosity, and service to Harvard have been substantial. Co-founder of the Harvard Business School (HBS) Association of India, he is also a founding member of the University’s South Asia Institute (SAI), the HBS India Research Center, and the SAI field office in Mumbai, India. He is also a longtime member of the Asia Center Advisory Committee. He was invaluable to the HAA in the planning and execution of the Global Series conference in New Delhi in 2006. Mahindra is currently a member of the President’s Global Advisory Council, the Committee on University Resources (COUR), the HBS Board of Dean’s Advisors, and the SAI Founder’s Club. He is also very active with the Harvard College Fund and his class fundraising efforts. In 2010, Mahindra made a transformative gift of $10 million to the Humanities Center. The center was then renamed the Mahindra Humanities Center in honor of his mother, Indira Mahindra.

Mahindra is the chairman and managing director of Mahindra & Mahindra. He has overseen the growth of the Indian company that his family founded in 1945 into a $16.7 billion federation of companies employing more than 180,000 people in over 100 countries. An influential leader in education and the arts, he started a national initiative to address the problem of illiteracy among underprivileged girls. He is trustee of the K.C. Mahindra Education Trust, providing scholarships to hundreds of Indian students; a governor of the Mahindra United World College of India; and a life trustee on the board of the Naandi Foundation, working to eradicate poverty in India.

He and his wife, Anuradha, live in Mumbai.

Over many years J. Louis Newell has demonstrated his devotion to the University. He has been a stalwart for the HAA, serving as chair and longtime member of the Committee for the Happy Observance of Commencement, leading an army of 400 volunteers in top hats every year at Commencement. In 2005, he earned the HAA Alumni Award, recognizing his longtime service and leadership to alumni and the HAA. He has also been active in the Harvard Club of Boston, serving as its vice president and director. He has been involved with the Harvard College Fund for nearly 50 years, including the Harvard College Fund Council, and has dutifully served as the Harvard College Fund participation chair for the past 25 years. In 1995, he received the Harvard College Fund’s Joseph R. Hamlen ’04 Award. As a former three-sport athlete, he served the Harvard Varsity Club in a number of capacities, including president and chair, and he earned the Varsity Club Award in 2008. He was the chair for the Annual Football Dinner for more than 35 years. He was a co-chair for his 50th Class Reunion.

In addition to his service to Harvard, he has been involved in serving Greater Boston. He was a trustee of the Massachusetts Eye and Ear Infirmary; Charlesbank Homes, a philanthropic association for elderly housing; and the Noble and Greenough School. He is the former president of Third Sector New England and emeritus director and president of the Freedom Trail Foundation. He is currently the vice chair of the Miramichi Salmon Association. Newell is retired from Seaward Management Corp.

He and his wife, Emily, live in Dedham, Mass.

Emily Rauh Pulitzer has demonstrated a strong commitment to Harvard, helping the University sustain its museums and arts program. A former curator at Harvard’s Fogg Museum and the Saint Louis Art Museum, in Missouri, she currently chairs the Overseers’ Visiting Committee to the Harvard University Art Museums. As an Overseer, she was also a member of a number of other visiting committees, including those for the Department of History of Art and Architecture, the Department of Visual and Environmental Studies, and the Graduate School of Design, and she also served on the Standing Committee on Humanities and Arts and the Committee to Select Honorary Degree Recipients. She serves on the Harvard Art Museums’ Collections Committee and Director’s Advisory Council. She has also served on the President’s Advisory Committee on the Allston Initiative. She and her late husband, Joseph Pulitzer Jr. ’36, have been generous donors to the Harvard Art Museums, giving financial support and important works of modern and contemporary art to help in the renovation of the Fogg. Joseph Pulitzer Jr. was an Overseer from 1976 to 1982 and received the Harvard Medal in 1993.

Pulitzer is founder and chair of The Pulitzer Foundation for the Arts, and she commissioned Tadao Ando to design the foundation’s building, which is located in a redevelopment area of St. Louis. She is a 2011 National Medal of Arts recipient. For 12 years, she served on the board of Pulitzer Inc. She chairs the board of the Pulitzer Center on Crisis Reporting; she serves on the boards of the St. Louis Symphony, the Contemporary Art Museum St. Louis, and Grand Center, the arts and entertainment district of St. Louis; and she is a life trustee of the Museum of Modern Art in New York and an honorary trustee of the Saint Louis Art Museum.

She lives in St. Louis.