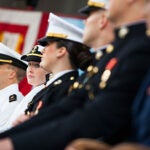 Moving on to the military

2014 marks the 25th anniversary of the Centennial Medal, first awarded in 1989 on the occasion of the 100th anniversary of the founding of Harvard’s Graduate School of Arts and Sciences (GSAS). Since that time, 96 accomplished alumni have received GSAS’ highest honor at an event that celebrates their achievements held on the day before Commencement. This year, four prestigious scholars received the Centennial Medal.

Bruce Alberts ’60, Ph.D. ’66, biophysics, holds the Chancellor’s Leadership Chair in Biochemistry and Biophysics for Science and Education at the University of California, San Francisco (UCSF). After earning his Ph.D., he spent 10 years at Princeton before joining UCSF as a professor in the Department of Biochemistry and Biophysics. During this time, he earned a reputation as an outstanding teacher and researcher who illuminated the mechanisms of DNA replication and co-authored “The Molecular Biology of the Cell,” now in its fourth edition.

Alberts is equally well-known for his advocacy. Since he first noticed substandard science resources in San Francisco public schools during the 1980s, he has dedicated his energies to improving science education throughout the United States. He built a partnership — that became an internationally recognized model — between UCSF and local schools that shared materials and equipment, believing strongly that the university had a duty to provide children and teachers with the tools needed to excel. During his time as president of the National Academy of Sciences, he spurred the adoption of national standards for K-12 science education and worked to bring science literacy and leadership to the developing world. Appointed science envoy by President Barack Obama, Alberts promoted science and the values of science in the Muslim world, and he continued to advocate for improved science education throughout the world as editor-in-chief of Science.

“Bruce Alberts is one of the most admired figures in American science,” says Richard Losick, the Maria Moors Cabot Professor of Biology at Harvard. He used his bully pulpits “to promote evidence-based approaches to science education [promoting research to determine what works and what doesn’t work], inspiring me and countless other colleagues across the country to devote ourselves as much to teaching effectively as to doing science.”

Keith Christiansen, Ph.D. ’77, fine arts, is the John Pope-Hennessy Chairman of the Department of European Paintings at the Metropolitan Museum of Art. While working toward his Ph.D., Christiansen received a Fulbright grant to travel to Italy and conduct research on the early Renaissance painter Gentile da Fabriano; he ultimately published his dissertation as a book that was awarded the Mitchell Prize for best first book in art history. A chance meeting in Florence with then-Director of the British Museum John Pope-Hennessy, who was about to take a new position at the Met, led to an offer to join the staff as an assistant curator.

Over his 37 years at the Met, Christiansen has held numerous curatorial roles and taught at Columbia, New York University, and Smith College. He has helped the museum acquire important works by Duccio, Pietro Lorenzetti, and Romanino, and he has organized successful exhibitions focused on Caravaggio and Michelangelo. In his current role, he oversees the Met’s world-renowned collection of old masters — seven centuries of individual masterpieces and cultural monuments. Christiansen has organized these treasures into “watershed exhibitions on topics as diverse as Mantegna, Tiepolo, Caravaggio, Poussin, and 15th-century Siena,” revealing a “remarkable curiosity and intellectual scope,” says Harvard curator Stephan Wolohojian.

Judith Lasker, Ph.D. ’76, sociology, is the National Endowment for the Humanities (NEH) Distinguished Professor of Sociology in Lehigh University’s Department of Sociology and Anthropology. Through the 1980s and beyond, she undertook what proved to be a groundbreaking exploration of women’s health and reproductive lives. Her first influential book on the subject was “When Pregnancy Fails: Families Coping with Miscarriage, Ectopic Pregnancy, Stillbirth, and Infant Death.” From that work, she developed a widely used quantitative tool for assessing the effects of pregnancy loss, called the Perinatal Grief Scale, and she conducted domestic and international studies that strengthened the literature on grief and bereavement. She also wrote “In Search of Parenthood: Coping with Infertility and High-Tech Conception,” part of a body of work exploring the social and ethical dimensions of new reproductive technology.

After exploring issues related to alternative currencies, social capital and health, and community-building, some of which resulted in a book co-authored with Ed Collum called “Equal Time, Equal Value,” Lasker returned to a topic that has interested her since her Harvard days — global health. In research she is conducting for a forthcoming book, she is exploring the impact of short-term American volunteering in international health care settings, assessing the effectiveness of this growing trend, whose origins are often well-meaning but whose results are untested.

“From her teaching and research, Judy’s legacy will span generations,” says Ellen Sogolow, professor emerita at Lehigh. “From her personal strength, her reach already is vast, in ways that perhaps science does not measure. Dr. Judith Lasker shines a bright light on how very much one person can accomplish with one lifetime.”

Leo Marx ’41, Ph.D. ’50, history of American civilization, is a senior lecturer and the Kenan Professor of American Cultural History Emeritus in the Program in Science, Technology, and Society at the Massachusetts Institute of Technology (MIT). In 1964, he wrote the book “The Machine in the Garden,” which reveals the conflict between ancient pastoral life and the incipient industrialization of society noted in works by Emerson, Hawthorne, and Thoreau. This seminal work essentially launched the field of American studies, and in 50 years, it has never been out of print.

Marx taught at the University of Minnesota and Amherst College before joining MIT in 1976 as the William R. Kenan Jr. Professor of American Cultural History. In over 40 years of teaching, he continued to focus on the themes he laid out in “The Machine in the Garden,” themes that have increasing significance in the 21st century. “It is rare for a book that is 50 years old to still seem contemporary,” says Joyce Chaplin, the James Duncan Phillips Professor of Early American History at Harvard. “But Leo Marx’s ‘Machine in the Garden’ reads as freshly relevant in 2014 as it did in 1964. As realization dawns that concerns about the environment and of the impact of human technology upon it are problems that will not go away, it is extraordinary to realize that Marx put nature and technology into the study of American culture from the start. He was right then, and he’s right now.”