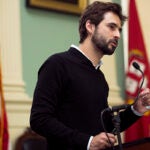 Support on the cutting edge

Will succeed Rothenberg in that role in July

Finnegan ’75, M.B.A. ’82, co-CEO of the Chicago-based investment firm Madison Dearborn Partners, is a past member of the University’s Board of Overseers and past president of the Harvard Alumni Association.

As treasurer, he will assume greater responsibility for overseeing University financial matters, while continuing to chair the Corporation’s finance committee and to serve on the board of the Harvard Management Company (HMC), which he joined this spring.

Rothenberg ’68, M.B.A. ’70, is chairman of Capital Group Companies, an investment firm based in Los Angeles. While carrying forward on the Corporation as a Fellow of Harvard College, he will continue to chair the HMC board of directors.

“Paul Finnegan and Jim Rothenberg are among the finest and most dedicated Harvard citizens in our worldwide community of alumni,” said President Drew Faust and Robert D. Reischauer, the Corporation’s senior fellow, in a statement announcing the appointments.  “Both have played vital parts in Harvard’s governance in recent years, through a period of exceptional change, and we are fortunate to have them carrying forward on the Corporation in these essential roles.”

Along with the president of the University, the treasurer serves not only as a Corporation member but also as an ex-officio member of the Board of Overseers.

A native of Scituate, Mass., Finnegan served as a Harvard Overseer from 2008 to 2012 before his election to the Corporation. Besides chairing the Corporation committee on finance, he has been a member of the governing boards’ joint committee on alumni affairs and development. He also serves as a co-chair of The Harvard Campaign’s executive committee.

“This is a moment of tremendous possibility for Harvard, and I’m honored to have this further chance to serve the institution,” Finnegan said. “Like many of my fellow alumni, I feel a debt of gratitude for my experiences here as a student, and I hope my service as treasurer can help create for others the sense of opportunity that Harvard created for me.”

Active in Chicago-area civic life and strongly interested in K-12 education, Finnegan is a member and past chair of the Chicago regional advisory board of Teach For America, and serves on its national board of directors. He also serves on the board of Advance Illinois, which aims to enhance public education for students statewide. He is a director of the Chicago Council on Global Affairs and a member of the Bowdoin College investment committee.

Involved over time with a wide array of Harvard’s Schools, Finnegan has been a member of the Dean’s Council of the Faculty of Arts and Sciences, the Board of Dean’s Advisers at Harvard Business School, the Leadership Council of the Harvard School of Public Health, and the Leadership Council of the Kennedy School’s Center for Public Leadership. In addition to co-chairing The Harvard Campaign, he is co-chair of the campaign for the Graduate School of Education and vice chair of the campaign for Harvard Business School.

“Paul Finnegan is an outstanding professional and a terrific person, someone who’s completely devoted to Harvard, and I know he will serve with distinction as treasurer,” Rothenberg said. “It’s been a great privilege to serve in that role over this past decade, during an especially dynamic period for Harvard and higher education, and I’m very much looking forward to my continued time on the Corporation, wearing a slightly different hat.”

Rothenberg has served within the Capital Group, one of the world’s leading investment management firms, since 1970. Now chairman, he has served over time in a variety of senior executive positions for the firm and its affiliates. Widely active in educational, civic, and community pursuits in the Los Angeles area, he chairs the board of the Huntington Hospital, is a member and past chairman of the board of public television station KCET, and a trustee of the California Institute of Technology.

Besides serving as Harvard treasurer, as a member of both the University’s governing boards, and as chair of the HMC board of directors, Rothenberg was a member of the University’s presidential search committee in 2006-07 and of the committee whose work led to the governance reforms approved in 2010 and implemented since. He has served on the Corporation committees on finance and governance since their inception in 2011.

A native of Pittsburgh, Rothenberg has participated in the alumni affairs of both the College and the Business School, having served on the Dean’s Council of the Faculty of Arts and Sciences (FAS), the FAS’s alumni planning committee for undergraduate education, and the Business School’s Board of Dean’s Advisors. A leader in Harvard’s fundraising efforts, Rothenberg, like Finnegan, is a co-chair of The Harvard Campaign executive committee. He has long served on the Committee on University Resources and has co-chaired several of his College reunions.