Faust says women should press ahead 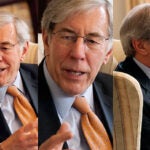 It’s hard to imagine today, but as a woman, Harvard President Drew Faust would have been unable to attend Princeton University, Yale University, or the University of Virginia in 1964.

The reality was little better in Cambridge, Faust told a crowd today gathered under a tent during the annual celebration of Radcliffe Day. Had she been a student then at Radcliffe, Harvard’s sister college, said Faust, Lamont Library would have been off limits. In 1967, the Harvard Undergraduate Council voted to ban women from the stacks because they would “make it impossible to study.”

At her own college, Bryn Mawr, Faust couldn’t wear pants to class or dinner.

On a day that celebrated the 135th anniversary of the founding of Radcliffe College, an institution founded to promote the education of women, and the 15th anniversary of the Radcliffe Institute for Advanced Study, created to support the exchange of ideas across disparate fields of study, Faust honored the efforts of her predecessors, trailblazers who helped women make major strides in the past century. But she also urged her listeners not to forget those struggles and to remain vigilant in their own efforts to secure women’s equality moving forward.

“I worry that a complacency is emerging in our society about the place of women, a complacency that too easily forgets that things were once otherwise and there is still a considerable way to go in American society,” said Faust, who before becoming president of Harvard was head of the Radcliffe Institute.

Faust was given the 2014 Radcliffe Institute Medal, presented annually to an individual who has had “a transformative impact on society.”

In her speech, Faust recalled the commitment and vision of Elizabeth Cary Agassiz and the 27 women who “stood up for the experiment that would become Radcliffe College.” Radcliffe’s dedicated leaders, she said, helped propel women forward because they experimented and took risks.

Radcliffe’s roots date to 1879, when Agassiz helped create the Society for the Collegiate Instruction for Women, nicknamed the Harvard Annex. In 1894, the annex was chartered as Radcliffe College by Massachusetts and named in honor of Ann Radcliffe, Lady Mowlson, who had established the first scholarship at Harvard College in 1643 when she provided 100 pounds to help “some poore scholar.” In 1999, Radcliffe and Harvard College formally merged, and the Radcliffe Institute for Advanced Study was created.

Faust praised Radcliffe for “opening those doors and windows for so many.”

“But as we celebrate the 15 years of the institute, and the 120 years of Radcliffe College and the annex that preceded it,” she said, “let us not forget the work still to be done, the responsibility we have inherited.”

Despite efforts at Radcliffe and elsewhere, women still lag far behind men in the workplace, politics, and the academy, Faust said. She cited a string of sobering statistics, including a persistent pay gap between women and men, the paucity of women entering the sciences and engineering, and the small percentage of women who hold positions as chief executives at Fortune 500 companies or in the U.S. Senate.

“A huge reservoir of female talent remains untapped,” she said.

Faust delivered her remarks during a ceremony that celebrated her own accomplishments as a Civil War scholar and author, the founding dean of the Radcliffe Institute, and the first female president of Harvard.

As the institute’s founding dean, Faust crossed boundaries of institution and of discipline, which Radcliffe Dean Lizabeth Cohen noted is a hallmark of “One Harvard,” “the embodiment of Drew’s conviction that bold ideas can make a difference.”

In introducing Faust, Harvard’s former President Neil Rudenstine said the University’s efforts to lure her away from the University of Pennsylvania had long been in vain until he offered her the position at Radcliffe and persuaded her to move north.

Rudenstine said his list of requirements for the post was long. He needed a major, widely admired academic who was thoughtful, wise, and daring, someone with a compelling vision, administrative and fundraising experience, and an ability to lead.

“One person stood out far above all others,” he recalled.

In taking on the role, Faust, expertly gave “form and shape to something whose nature and processes were then obscure, but now in the light of today, seems to have been completely predestined. More than anything, she made certain that Radcliffe’s commitment to the education of women was in a number of significant ways brilliantly sustained.”

Radcliffe Day unites hundreds of fellows, alumnae, and friends. The celebration included an afternoon of panels and discussions on science and literature, and a morning session with scholars from Harvard and elsewhere, honoring Faust’s life and work.