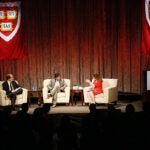 Researcher one of the first women in chemistry at Harvard

Thérèse Wilson, a chemist at Harvard for more than five decades and an expert in chemiluminescence and bioluminescence, died peacefully in Cambridge on April 28.

Born in Brussels to Frédèric and Claire Bremer, she studied at the Université Libre de Bruxelles, where she obtained a doctorate in chemistry in 1952. In 1954, when there were few women in American science — and none on the faculty of the Harvard Chemistry Department — she came to work with George Kistiakowsky, the renowned physical chemist, on a Fulbright grant.

After taking time off to have three children she resumed her career at Harvard. She went on to make important contributions to the understanding of the chemical and biochemical reactions that produce light, first in the lab of Paul Bartlett of the Chemistry Department and later in the lab of J. Woodland Hastings in the Department of Molecular and Cellular Biology.

Singlet oxygen (an excited form of oxygen) reacts with a certain alkene (a chemical compound) to form a dioxetane that decomposes, emitting light. In the Bartlett lab, working with the graduate student A. Paul Schaap, Wilson investigated the efficiency and energetics of this important chemiluminescent reaction. Years later, these reactions were harnessed to develop highly sensitive and widely used medical and environmental tests.

In the Hastings lab, she continued her research on the mechanisms of chemiluminescence and the role of singlet oxygen, while also taking a growing interest in bioluminescence. Late in her career, she began a new area of research on North American glowworms (larval bioluminescent flies) that emit blue light. She enjoyed leading nighttime expeditions to collect the specimens in the Appalachian Mountains.

Perhaps the greatest satisfaction of her life in science came from nurturing the careers of young scientists from around the world, many of whom remained her devoted friends. Some of her most rewarding professional relationships were with a string of postdoctoral fellows from the University of São Paulo and other universities in Brazil, beginning with Etelvino Bechara, who came to work with her in the 1975. Bechara was followed to Cambridge over the years by several of his students, and Wilson was invited in turn to Brazil to lecture and teach.

Wilson was active in science to the end. In addition to many scientific papers, she completed a book, “Bioluminescence: Living Lights, Lights for Living,” with Hastings, her longtime collaborator, published just a year before her death by Harvard University Press. “In the emissions of bioluminescence” she wrote in a reminiscence of her life, “I hope our readers will discover in our book the infinite fantasy of nature.”

She is survived by many family members, including a brother, Antoine Bremer of Brussels; her children, Anne Goldizen of Brisbane, Australia, Paul Wilson of New York, and Steven Wilson of Brooklyn, N.Y.; her stepchildren, David Wilson of Ithaca, N.Y., and Nina Cornell of Billings, Mont.; and eight grandchildren and six great-grandchildren.