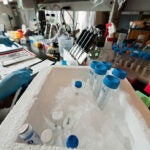 Shelley Brown was pointing toward a life of cutting-edge stem cell research. Then one day in 2010, she says, she encountered the divine.

“Something was moving, and I thought I must have hit the petri dish by accident,” said Brown, who had been trying to direct a set of stem cells toward bone cells during her Ph.D. work in biomedical engineering at the University of Michigan. “When I looked closer under the microscope, I realized the cells were beating. They had spontaneously differentiated into electrically coupled, beating heart cells. That’s when I felt at the mercy of God, and that’s when I decided to become a Christian.”

The revelation sent Brown on a mission to explore the complicated intersection of religion and embryonic stem cell science in tandem. She went straight from her thesis defense to Harvard Divinity School (HDS) to earn her master’s in divinity, and has spent the last three years figuring out “what science and religion is, and how we deconstruct, reconstruct and bring those two areas back together.”

Brown, who grew up in Chicago, had long been interested in figuring out the universe. As a girl, she loved complicated puzzles, chess, and using science to discover “how things worked.” She dreamed of becoming a mathematician, a neurosurgeon, a cardiologist, or a rocket scientist. Her mother, a teacher, and her father, a truck driver, encouraged her to pursue what she loved. In high school, she became enamored of proteins and the idea of blending engineering and biology.

As a Stanford undergraduate, Brown created her own major in chemical engineering with a heavy biology focus. A master’s degree from Michigan followed. After her Ph.D. epiphany, she joined a local Baptist church where she filled in as an associate minister. She ran the university’s campus ministry program and hosted Bible study groups, all while logging long hours in the lab exploring how embryonic stem cells become cartilage, fat, and bone.

“Little did I know it, I was doing science and religion then.”

Brown was exploring postdoctoral options at the Harvard Stem Cell Institute when she spied a link to a lecture on religion and medicine with professors from HDS and Harvard Medical School.

“I was watching the forum and I said to myself … ‘this is it.’” Instead of asking her adviser for a science recommendation, she asked him to write her one for HDS.

In Cambridge, Brown again embraced disparate worlds. She served as an associate minister at a local church, took courses in public policy at Harvard Kennedy School, preached on stem cells and religion at the Memorial Church, and continued her research in a lab at the Massachusetts Institute of Technology.

Those diverse experiences, she said, have provided her with a rare big-picture view.

“Being able to live, to sit to learn side-by-side with individuals who are from all over the world and have so many different, varied religious and ethical and moral views has just made me a better person, minister, scientist, woman, daughter, everything,” said Brown, who got involved during her first year with the School’s Science, Religion, and Culture Program, run by Ahmed Ragab, Richard T. Watson Assistant Professor of Science and Religion.

Brown’s time at Harvard also helped her crystalize her post-graduation plans. While she hopes one day to return to the lab, for now she wants to head to Washington, D.C., to work on public policy.

“I believe in stem cell research, I believe in biomedical engineering, and I believe in God, and I think that all of that can still come together to serve society and achieve a public good … But we have to be able to do the research. And I think now that I have been able to take a step back, policy is where I think I can make a mark.”

Brown knows her work won’t be easy, and that some groups oppose embryonic stem cell research. But she intends to approach interactions with others by using what she learned at Harvard, she said, encouraging people to “never compromise what they believe.”

“Clearly, I have an opinion on stem cell research, but my point in having these conversations and doing the work that I do is not to make an ideological argument ever for or against,” said Brown. “My point is to be able to bring invested parties together to be able to talk about these very difficult issues.”