‘The Kid Who Would Be Pope’ 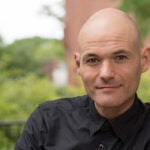 Jack Megan was making his way across Harvard’s campus on a bitter January afternoon in 2013 when his brother Tom called, desperate to read him a letter. Broadway legend Stephen Sondheim had written to say that their musical had just won the Richard Rodgers Award for emerging theatrical talent.

Megan, the director of Harvard’s Office for the Arts (OFA), didn’t believe a word. “I thought he was joking,” he said, “so I made him fax me a copy of the letter when I got back to the office.”

It still seemed surreal several months later as the composing and writing team waited on a New York City stage surrounded by arts luminaries to receive their award from actress Meryl Streep for their touching and humorous coming-of-age musical, “The Kid Who Would Be Pope.” (The show follows the life of Billy, a Catholic schoolboy who falls for his enchanting new drama teacher, Sister Katherine, and decides to become pope so he can change the Vatican’s rules and marry his new love.)

Over the past year, that sense of living in a dream morphed into fast-paced reality as the pair fine-tuned their production for a three-day run that kicks off Tuesday in New York’s Ars Nova off-Broadway theater. With support from the Rodgers Award, which helped them secure the performance space and hire seasoned actors, the Megans will stage a stripped-down version of their show for a room filled with industry executives.

The work is presented to producers, said Jack, “with the hope that someone options it.”

But getting the musical before an influential audience was never the original goal. The show was conceived in the 1990s, when the director of a nearby arts camp needed a summer theater piece in a hurry and turned to the brothers for help. The Megans, both artists and musicians, crammed to craft a story, compose songs, and write lyrics in three hectic months. Their work paid off, and the show was a smash. It was gaining commercial success and traction with local theaters in 2000 when accusations of sexual abuse in the Catholic Church shook the world.

“Even though our story was really a universal one about growing up and realizing essential truths about your place in the world, because it was in a Catholic setting, the interest suddenly stopped cold,” said Jack. “Nobody wanted to touch the play.”

The work sat on the shelf for almost a decade. Then, at the suggestion of a friend, Tom took a chance and submitted it to the New York Musical Theatre Festival. Of the 450 scripts submitted, 12 were accepted for production through the festival’s Next Link program in 2011. “Pope” was one of them.

“We suddenly had this new forum in New York with the show,” said Tom. The show again proved popular with audiences. Based on its sold-out run, the brothers applied for the Rodgers Award.

On the phone from New York after a long day of rehearsals, the two were at ease as only siblings comfortable with close collaboration, inside jokes, family history, and a shared passion can be. Growing up in a household with six musical kids, the Megan boys spent their early days fighting for the right to play the house piano, and composing songs and shows for family and friends. Though Tom chose a life as a professional composer, lyricist, and librettist, and Jack headed into arts management, they’ve continued to work closely on musical projects.

Decades later, musical theater is still child’s play for the brothers. The genesis of their current production was autobiographical, a combination of their love for Julie Andrews, the Beatles, and Stevie Wonder, and their experiences growing up Catholic. “It was also based on this notion of what it was like to be a child and to be enamored of an adult who saw the true you — the you you wanted to be and who made life exciting,” said Tom.

When composing, the Megans often take turns getting down the lyrics, the music, or the plot alone, then reunite to compare notes, rework, and revise. Their ensuing conversations can be blunt, and at times brutally honest, but never personal. “I’ve always felt with Jack that we’re always trying to find the best solution moment to moment, and there’s never a moment when it’s about the other person’s ego,” said Tom. “It’s really always been about what’s best.”

It’s also about having fun. The Megans are quick to joke, tease, or laugh. They agree they share a comic as well as an emotional sensibility that informs their work, born of their close attachment as brothers, friends, and collaborators. “When there’s an emotional moment in the show,” said Tom, “we feel like it’s an earned moment because we both really do feel that way about it.”

“Laughter has helped a lot in this process,” added Jack, “because there have been hard times along the way.”

Perhaps the hardest time for Jack has been stepping into the spotlight. Anyone who knows the dedicated OFA director knows how he has shunned attention for the past 13 years, eagerly shining the light not on himself, but on Harvard’s wealth of talented students and his committed colleagues. His brother, said Tom Megan, “diminishes his own artistic gifts.” But Jack, a skilled jazz pianist and composer, recently admitted that there comes a time when you have to take a chance.

“I love supporting other people’s art at Harvard. I love that. But there’s safety in not putting your own stuff out there. And at some point, you just say, ‘What the hell.’ ”