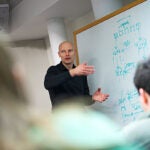 Avoid the ‘science of yesterday’

“The whole country knows about Boston. When a challenge presents itself, the entire community here comes together. The eradication of the Asian longhorned beetle is a great example of that,” said Gary Woodward, the U.S. Department of Agriculture’s deputy undersecretary of marketing and regulatory programs.

On a gorgeous Monday morning at the Arnold Arboretum, city, state, and federal authorities, as well as members of the Arboretum staff and officials from surrounding communities, gathered to mark the evident eradication of the Asian longhorned beetle, an invasive insect that since 2008 has devastated the Worcester area (some 34,000 trees had to be destroyed there), and threatened to do the same in Greater Boston.

The large, six-legged, black insect with white spots burrows through its victims from the inside, leaving behind big exit holes and dead trees. When the beetle was discovered across the street from the Arboretum in 2010, infesting six trees on the grounds of the Faulkner Hospital, it was feared that it would wreak havoc on the Arboretum’s priceless collection of 15,000 woody plants.

As part of a coordinated response that included the Arboretum and government authorities, a 10-mile quarantine zone was set up around the infestation area. Intensive, coordinated efforts ensued to identify, contain, and eradicate the beetle. The quarantine was officially lifted at Monday’s ceremony.

Jack Murray, commissioner of the Massachusetts Department of Conservation and Recreation, described the collaboration as an example of what’s possible “when the community comes together around shared goals.” Arboretum Director William “Ned” Friedman credited “partnerships that reached across universities to cities and state and the federal government,” and declared, “Today the Arboretum is safe, as are the communities around us.”

To understand how the campaign to safeguard the Arboretum worked, the Gazette spoke with Stephen Schneider, its director of operations.

GAZETTE: What was the worst-case scenario when the Asian longhorned beetle (ALB) was discovered near the Arboretum back in 2010?

SCHNEIDER: The ALB had the potential to devastate our trees. In New England, maple trees in particular are so valuable economically, especially for the syrup and tourism industries. When there’s any sign of ALBs on a tree, regulations require that the tree be taken [destroyed].

It could have been a far different story here. If the infestation had spread, the Arboretum could have lost several major collections, including our comprehensive birch and maple collection. Aside from watching our collections being wiped out, the city of Boston would have lost trees wherever you have swaths of maple, which is a lot of places, such as along tree-lined streets and throughout the Blue Hills.

GAZETTE: How were the ALBs first detected?

SCHNEIDER: It happened right across the street from the Arboretum on the grounds of the Faulkner Hospital. The groundskeeper there noticed that something was eating their trees, and ultimately alerted federal authorities, who moved in fast once ALBs were identified. Six red maples had to be destroyed. We were lucky because the ALBs had just emerged from the Faulkner trees and hadn’t had enough time to fly over to other nearby trees.

GAZETTE: What was the Arboretum’s response to the discovery of ALBs across the street?

SCHNEIDER: We’d seen an ALB infestation in Worcester a few years before, so we were already on alert. In 2008, we set up a system to scout our trees for ALBs, and we also created a response plan just in case. When ALBs show up, you immediately lose ownership of the situation. The approach then needs to be one of collaboration with state and federal authorities. We were prepared and followed our response plan, which included engaging closely with those authorities. Luckily, we’d just finished our scouting, and we had a pretty good idea that we didn’t have a major, Worcester-like infestation on our hands.

GAZETTE: How would you describe working with government agencies in coordinating an effective response to the ALB threat?

SCHNEIDER: In conjunction with the USDA (U.S. Department of Agriculture), we began conducting a comprehensive ground and canopy survey of all ALB host species, which took months. The federal response protocols also required doing pre-emptive pesticide treatment around a quarter-mile radius. We took issue with their pre-emptive approach, given that our comprehensive survey didn’t turn up further signs of ALB infestation. Our approach is to use chemicals when we have a known, real threat, not one that “might” exist. There was much debate and disagreement on this issue. Fortunately, we had already developed a good, collaborative relationship with federal authorities, so we were able to engage in intelligent conversations around these issues without people taking things too personally.

All sides understood that we were trying to do what’s best for the collection here. After much debate, the bottom line emerged that we needed to follow the federal protocols regarding pre-emptive chemical treatments, but federal authorities allowed us to use our know-how and technology in doing so.

We used our GIS (geographic information system) mapping equipment and our GIS program to be more precise in targeting those plants that would get soil treatments versus those having to get trunk injections (which are more stressful on trees). Furthermore, we strategically removed some scrub plants that were not part of our collection. At the end of this process, and using all our know-how, we succeeded in cutting in half the amount of chemicals the federal government used in our collections, which also saved taxpayers money. We always want to use chemicals responsibly, if we need to use them at all, even though we understood that federal protocols mandated pre-emptive treatments.

GAZETTE: What lessons have you learned from the successful collaboration to eradicate the ALB in Boston?

SCHNEIDER: The whole process confirms that having a response plan already in place works. Working closely with governments, developing these important relationships, will also help us moving forward against other potential infestations. Government authorities showed they were open to collaboration, applying their protocols in a more flexible way, especially in regard to chemical treatments. They’re starting to say now: ‘We really need to look at each infestation on an individual basis,’ as happened here in Boston. I believe that their being so open to hearing what we had to say, about how dynamic and different each ecosystem is, really helped response efforts. They took into account our intelligent pushback and questioning, which we offered in a solution-oriented way, and collaboration really worked here.