At 71, he earns his third degree 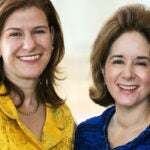 As a boy in the early 1950s, Henry S. Hacker would hop on his bicycle with a 50-cent piece burning in one pocket and set off in search of baseball cards to buy. Collecting in general became his lifelong passion and avocation, running like a thread though successful careers in law, finance, and marketing.

Along the way, Hacker, now 71, also collected a bachelor’s degree at Yale University and a J.D. at Cornell. Now he is getting his third sheepskin, a master of liberal arts (A.L.M.) in museum studies from the Harvard Extension School. In 2008, after 40 years in or near New York, and with his three children grown, Hacker partly retired and moved to Cambridge, easing a transition back to the classroom. Back then, he asked himself, “What would I do if I don’t go to school? I don’t play golf.”

Museum studies, with its correlation to collecting, seemed a natural. “I’m a serial collector,” said Hacker, who has bought fine art, photographs, and even — one more time — baseball cards. “I go from genre to genre,” he said.

Hacker eventually acquired the adult equivalent of that boyhood 50-cent piece, but even earlier he had acquired what he called “a pretty good eye.” As a young lawyer in a prestigious New York firm, he daydreamed about curating the art on the walls. “Sometimes,” said Hacker, “I would lose focus and start thinking about art.”

In the 1970s, his eye for art and his urge to collect led him to buy photographs “from these young German kids who became rock stars of the art world,” he said. (One was Thomas Struth, whose photos today fetch six figures.) In the ’80s, Hacker and a friend curated a gallery exhibit of art photographs.

Then came another step natural to many collectors: giving everything away. Serial collectors often become serial donors, said Hacker. “If you give your collections to a museum, you can always go visit them.”

Then came his passion for artful posters depicting 20th-century modes of British transportation. He assembled 500 pieces, and donated most of them to the Yale Center for British Art. A 2010 show there, along with a handsome hardbound catalog of images and essays, was “my crowning achievement,” said Hacker.

He started his museum studies coursework in the fall of 2008, and finished by the following summer. After a 2010 internship at the Museum of Fine Arts in Boston, Hacker set out to write a thesis on a collection of art posters amassed decades ago by Hans Sachs, a German-Jewish dentist. Sachs had started collecting in 1895, and by 1938, when the Nazis seized the artworks, he had more than 12,000 items.

Sachs escaped the Nazis and moved to the United States, as Hacker’s parents did. The thesis evolved and took a wider view of Nazi-looted art, examining the puzzles of ownership and restitution that emerged after World War II, and summarizing the legal disputes that in 1999 led to the Washington Principles, a code of behavior regarding disputed art. Hacker, who suggested further reforms, concluded his thesis on a somber note. “The proper care and treatment of this art,” he wrote, “remains the unfinished business of the Holocaust.”

Hacker said that the rigor of the museum studies program came from “a self-imposed desire to do well.” He plans to audit courses this fall in the visiting fellows program at the Graduate School of Arts and Sciences. Hacker may study the economics and psychology of collecting, a subject he once taught at the New School in New York.

“Collecting to me has a kind of behavioral primacy,” he explained. It is a nexus of ageless desires for acquisition and display that invites study. Collecting also pits Adam Smith against Karl Marx, said Hacker, since it expresses the enduring human tension between private and communal property.

Next fall, he may follow threads laid down in his thesis about a dark era. “Rich Jewish collectors struggled to get their art out of Europe at a time when owning modern art could bring arrest or worse,” said Hacker. “What paintings you liked were a matter of life and death.”