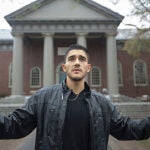 A hand up to a better future

Eleven years ago, young Eric Westphal boarded a plane in his native Brazil and flew to Miami and then on to frozen Boston. Behind him was Tubarão, the subtropical city of his birth, where a narrow river of the same name eases its way through a low-rise downtown to the nearby ocean.

Soon after his world-shifting flight, Westphal, 11, walked into a fifth-grade classroom in Somerville, Mass., unable to speak a word of English. After that hurdle came a cheerful boyhood in nearby Everett, where his father was a cable installer and his mother a housecleaner. Westphal became a strong student, athlete, and debater.

Then came marriage at age 18, in the fall of his senior year at Everett High School. (“It forced me to mature extremely fast,” said Westphal.) Then came — improbably, he said — admission into Harvard College. “I had some serious confidence issues,” Westphal said of his feelings at the start. “I figured: I’m not going to fit in; I’m from a public school; I’m going to have to work really hard to just barely make it.”

Looking back, Westphal’s advice to freshmen is: “Believe in yourself a little bit. Hard work and effort and a good attitude go a long way.”

Hard work runs in his family, he said, starting with his parents, who opened a small store in Tubarão that in 20 years grew into a supermarket, a prosperous business until an economic downturn. As a young immigrant to the United States, Eric showed the same enterprise in learning English, though first, he admitted, “I felt despair.” In six months he could converse with his new friends, and in 18 months he was a confident master of his new language. (“At that age,” said Westphal, “you learn you have to get out of your comfort zone.”)

He learned to read partly by haunting online Boston Celtics fan sites and to write by posting comments. In high school Westphal played varsity soccer, and also started a debate club. He immersed himself in American history with teacher Dominic Rinaldi, the mentor who later encouraged him to apply to Harvard. Until then, Westphal said of the College, “I can’t even say it was a dream.”

In Everett, Westphal and his wife, Cheryl, a florist who has since gotten her R.N. degree, moved in with her parents, since his had returned to Brazil. Once at Harvard, Westphal lived first in Matthews Hall and then at Currier House, always in a single room so Cheryl could visit.

“It’s been easier than I expected, to be honest,” he said of being a married undergraduate. “There’s a degree of sacrifice, but Everett is so close.”

If there was sacrifice, it involved turning down summertime international travel to be close to home. Westphal spent his first college summer working in Boston at Accion, a microfinance nonprofit, and the next two summers in New York City’s financial district (where he has a job lined up after graduation).

He founded the Harvard Undergraduate Brazilian Association as a freshman, played House soccer (Currier took the 2014 championship), managed a small stock portfolio with a student business group, and spent all four years with Harvard College Faith and Action, a gospel-centered Christian group. Arriving at the College, Westphal remembered thinking, “I’m not going to find any believers.” Now that he’s ready to leave, he knows that belief is a far wider experience than he imagined as a teenager.

His expanded worldview grew out of a “culture of mutual respect” learned over four years, said Westphal. Add this lesson to everything else, he said, and the sum is: “Harvard completely transformed me.”