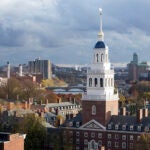 After 18 years of service on Harvard’s two governing boards, including the past four as senior fellow of the Harvard Corporation, Robert Reischauer will step down on June 30, ending an official relationship with Harvard that began — unofficially — as a kid running around campus getting into trouble.

Reischauer, son of the late Harvard Professor and U.S. Ambassador to Japan Edwin Reischauer, grew up in faculty housing near the Harvard Herbaria. He matriculated in Harvard College already well-versed in knowledge unknown to most classmates: the layout of Harvard’s subterranean steam tunnels, information that he delighted in sharing.

Reischauer received a bachelor’s degree in 1963 before heading to Columbia University for graduate studies. Over his long career as one of the nation’s leading experts on the federal budget, Reischauer worked at The Brookings Institution, the Congressional Budget Office, which he directed from 1989 to 1995, and the Urban Institute, of which he was president from 2000 to 2011 and is now president emeritus. He was elected to the Harvard Board of Overseers in 1996 and joined the Corporation in 2002.

Reischauer was a key architect of the governance reforms, approved in December 2010, that ushered in historic changes to the structure and work of the Corporation. Among other things, those changes nearly doubled the size of the Corporation from seven to 13 members; added a more elaborate committee structure to focus on core fiduciary matters such as finance, capital planning, and governance; and introduced norms for Corporation members’ length of service, including a presumptive 12-year maximum.

Reischauer, stepping down after completing his own dozen years of service, spoke with the Gazette to offer his thoughts on the institution and the challenges and opportunities it faces, and personal reflections on his long association with Harvard.

GAZETTE: As you look back on your years of service — six years on the Board of Overseers, 12 years on the Corporation, four years as senior fellow — how would you describe your experience?

REISCHAUER: I would recommend it to anyone. It’s an unbelievable opportunity, to be part of the governance of what I regard to be the greatest university in the world. I think that’s true from an intellectual and research standpoint, but also because so much of Harvard’s research and education is focused on making the world a better place to live in.

You have a feeling [when serving on the governing boards] that you’re making a difference. In some organizations, boards give a stamp of approval to decisions that, by and large, are made by management, and the boards don’t fully engage with policies and initiatives that they’re endorsing. But I can say that has not been the case in my 18 years at Harvard. Presidents and other leaders have seriously weighed in and in many cases adopted suggestions, advice, and approaches that those of us on the governing boards have proposed.

Harvard is an unbelievable institution. In the morning when I wake up and read the Gazette, read the Crimson, look at other postings [about the University], I want to jump on the plane and come up here and participate, learn, express an opinion on a controversial issue. There’s just so much going on, and the individuals who are engaged in the University are so talented.

GAZETTE: How has the University changed over the course of your involvement?

REISCHAUER: It has changed in very fundamental ways.

First, I would say that there is an emphasis on teaching and learning, and how to innovate, that has grown over the last two decades. More professors are focusing on the learning process and seeking ways to make their teaching interesting and engaging to students.

Second, there’s a lot of new, interesting research going on. This, of course, has always been true at Harvard, but today we’re harvesting the fruits of a period — one that has clearly come to an end — when federal and foundation funding for research was fairly robust.

Third, Harvard is much more informed in its decision-making processes. It has analyses and information that have improved the quality of its policies and its decisions.

Look at something like [Senior Vice Provost for Faculty Development and Diversity] Judy Singer’s work on faculty and faculty diversity: It looks at where the University’s faculty members come from and who they are, what countries they come from, their gender and family circumstances, all with an eye to how we can make Harvard an institution where they feel at home, where they feel they can be most productive.

I think Harvard has become much more aware of the consequences of different decisions, what the institution’s risk profile is, how we can maintain quality and experiment with new approaches while avoiding excessive risk. This is a new emphasis, and, of course, I think the governance reforms have done a good deal to improve decision-making as well.

GAZETTE: How have the governance reforms gone?

REISCHAUER: The governance reforms have matured at this point. With Robert Rubin and me going off of the board [after 12 years each], the Corporation has begun the regular renewal process that the reforms envisioned.

In addition, I think the Corporation has gained the capacity to be a stronger and more productive contributor to decision-making at Harvard today because its expansion has created a broader range of perspectives and deeper expertise than existed before the reforms. It has engaged, through its new committees, with individuals who have special knowledge in particular areas, including capital planning and facilities, finance, or alumni development. These individuals, who are not members of the governing boards but are part of the governing process, have added a great deal to the quality of the recommendations that are provided to the Corporation for decisions.

GAZETTE: Could you say more about expansion of the numbers of fellows? How has that gone?

REISCHAUER: The rough doubling of the size of the Corporation has naturally meant that we now have individuals with wider and deeper expertise than we could achieve with a smaller group. That’s not because the smaller group was not very talented, but because there is a limit to how much any individual can bring.

The concern I had as we were going through the reform process was that the nature of the discussion at Corporation meetings would change. I was concerned that a larger body would lead to more reticence, or that members might coalesce into groups that had different views on a certain topic.

The Corporation is very unusual. It is in some ways like a family sitting around a dinner table arguing, perfectly open in their discussion, knowing that they won’t be sent away if they don’t agree with the majority opinion. It’s very refreshing to see the range of advice and perspective focused on an issue or a problem.

And that hasn’t changed at all. If you were a fly on the wall, you could not guess which fellows were on the Corporation before the expansion and which were new members. That was deliberate. We expanded very gradually to be sure that the candid, open quality of our discussions didn’t change dramatically. We brought in, as the first three new members, individuals who had a good deal of experience with Harvard and its governance. Susan Graham and Joe O’Donnell had both served for six years as Overseers and had been very engaged in other ways. Larry Bacow has three Harvard degrees and, having been president of a neighboring university [Tufts], had a lot of familiarity with the challenges and opportunities that Harvard faced.

GAZETTE: What do you see as current challenges facing the University? We’re in the middle of a capital campaign, for one.

REISCHAUER: That’s not a challenge; that’s an opportunity. I think the campaign is going very well, and the credit goes to the careful planning and consensus building that was done in the three previous years, during the quiet phase. Part of the credit also goes to Harvard’s alumni and friends who recognize that a gift to Harvard is an investment, not just in the University but in the betterment of humankind. It’s a recognition that what Harvard does affects the world in so many positive ways, that you’re being philanthropic well beyond the borders of Cambridge and Boston when you give to Harvard.

I think the campaign so far is a tremendous success, and I have every reason to believe that will continue. We have great leadership — three members of the Corporation and several Overseers are among the co-chairs of the campaign — and we have a president who is enthusiastically involved and extraordinarily talented at presenting Harvard’s case. We have entrepreneurial deans and faculty members who are adept at describing needs in the Schools. But all of that doesn’t get you to the goal line if you don’t have alumni and friends who believe in the institution and its mission.

GAZETTE: What are other challenges facing Harvard?

REISCHAUER: One of the huge challenges facing the University is that the financial model that has undergirded high-quality research universities in the past will need to be reconsidered and adapted to sustain these institutions in the future.

Federal funding for research is not going to grow at the rate that it has over the last 30 years. Tuition is not going to rise as rapidly as it has in the past, and the investment returns from our endowment will have a difficult time matching the returns of the past several decades.

At the same time, opportunities to slow the growth of costs will not be easy to achieve. As we talk about digital learning and other innovations, we demand higher quality, but higher quality almost inevitably means higher costs.

GAZETTE: In your different relationships with this institution, which have ranged from student to senior fellow, is there a particular memory that you have or a particular sense of Harvard as a place that has meant something to you personally?

REISCHAUER: Well, as you may know, I grew up on Divinity Avenue in a house that has since been torn down. There were two yellow houses, built for past presidents of Harvard, and after World War II, they rented them out to faculty.

Until I was in fifth or sixth grade, we lived in one of those houses, sharing it with another family. So, in many respects, I was a child of this institution. As I’ve told many people, I got my introduction to the Harvard steam tunnels through that house and became quite an expert in where they went. When I came here as a student, I introduced my roommates to the steam tunnels, and we traveled underground at night.

Also, over near the Divinity School, there’s a building where the Harvard piano repair facility is today [Vanserg Hall]. What I remember most was that it had the machine with the cheapest Cokes: just a nickel. As little kids, we used to go and buy our Cokes there. Has there been change at Harvard? Yes, there has. The price of Coke has gone up.