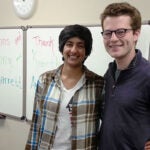 “Three factors combined to help produce this remarkable result: Harvard’s revolutionary financial aid program, an unprecedented welcome extended by undergraduates and faculty to admitted students who came to Cambridge for the April 26-28 Visitas weekend, and a comprehensive digital communications program reaching out to all admitted students through our cutting-edge website, video, and social media channels,” said William R. Fitzsimmons, dean of admissions and financial aid.

The class will have a record number of African-Americans (177) and Latinos (185), as well as the second-largest number of Asian-Americans (351) in Harvard’s history.  “We are very grateful to the many involved in the Undergraduate Minority Recruitment Program [UMRP] who worked toward these results throughout the year, and especially during the crucial month of April,” said Roger Banks, director of recruitment and co-director of UMRP.

“UMRP coordinators called, emailed, and met many members of the Class of 2018 over the past year,” said Lucerito Ortiz, co-director of UMRP.  Added Tia Ray, assistant director, “UMRP coordinators and other minority students made the critical difference during Visitas by hosting nearly one-third of all pre-frosh who attended the weekend.”

“Harvard’s yield is particularly notable because the College does not offer athletic or other non-need-based scholarships,” said Marlyn E. McGrath, director of admissions.  In addition, Harvard’s early action program, unlike binding early decision programs, allows admitted students to apply elsewhere and asks only that they reply by May 1 after comparing other offers of admission and financial aid.  “Such freedom and flexibility allow a student more time to choose the college that provides the best match, a contributing factor to Harvard’s nearly 98 percent graduation rate,” said McGrath.

“Many changes made at Harvard over the past decade were noted by admitted students as major factors in their decision to matriculate here,” said Fitzsimmons.  They included a fourfold increase in the number of small freshman seminars; the availability of more than 40 secondary fields of study (minors); the new School of Engineering and Applied Sciences; an augmented advising system featuring 200 peer-advising fellows and 60 resident proctors; expanded opportunities for close collaboration with faculty through research centers and Harvard’s graduate Schools; revitalized theater and arts opportunities; increasing numbers of options for study abroad; and the new Innovation Lab.

“Harvard’s financial aid program has been significantly enhanced in recent years, providing additional aid to low- and middle-income students,” said Sarah C. Donahue, Griffin Director of Financial Aid.  “With the unwavering commitment of Michael D. Smith, dean of the Faculty of Arts and Sciences, and Drew Faust, president of Harvard University, Harvard has kept its doors open to talented students from all economic backgrounds,” she said.

Families with incomes from $65,000 to $150,000 and with typical assets pay from zero to 10 percent of their annual incomes, and families with higher incomes can still receive need-based aid depending on individual circumstances, including having multiple children in college or unusual medical expenses.

Students are not required to take out loans, and home equity is not used in determining financial aid.  As always, students are asked to contribute toward the cost of their own education by working 10 to 12 hours per week during the school year and obtaining summer jobs.

Visitas, led by Tim Smith and assistant directors Rachel Brown, Maxwell Dikkers, Bryce Gilfillian, Tia Ray, and Kanoe Lum Williams, offered panels, receptions, and small gatherings for students and their parents.  “The engagement of so many faculty and students in welcoming our guests created a realistic sense of the excitement that marks undergraduate life,” said Smith.

Faculty and administrators took part in the program, including a welcome by Faust.  Nearly 1,000 undergraduates served as hosts and other facilitators.  “Despite the weather, Harvard’s sense of community was very much on display throughout the Visitas weekend, thanks to the freshman dean’s office and the Houses,” Smith said.

Those admitted students who were not able to travel to Cambridge could still experience a “Virtual Visitas” through a combination of live-streamed presentations, interactive Google “Hangouts On Air,” and social media content shared through the hashtag #WelcometoHarvard.

Victoria Marzilli, manager of social media recruitment, said, “We were able to convey the vibrant energy and community of Visitas with admitted students around the world through Facebook, Twitter, Instagram, and Tumblr.  It was wonderful to see faculty, staff, students, and alumni from across the University get involved online.”  Amy Lavoie, director of digital communications, added, “With support from Professor David Malan’s CS50 students and staff, the president’s welcome and ‘Visitas Thinks Big’ were recorded for YouTube so that all admitted students could be part of the featured events.”  The Virtual Visitas initiative also offered an enhanced digital experience for those visiting Cambridge.  Tweets and pictures from members of the community were displayed on TV screens in the registration area.

This year’s high yield means that only a small number (perhaps 15-20) of applicants will be admitted from the waiting list.  The number will be determined over the next few weeks as admitted students decide whether to defer admission to pursue options that often develop during May and June.