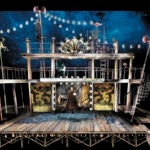 A 12-hour adaptation tapping all 32 surviving Greek tragedies might sound like a tough sell for audiences. But playwright and director Sean Graney doesn’t think so.

The immersive event recaptures the spirit of the ancient daylong festivals where the works were originally presented and used to generate discussions about important topics of the day, said Graney during an interview in his airy office at Radcliffe’s Institute for Advanced Study.

“I wanted to create a community,” Graney said of his work “All Our Tragic,” which he has fine-tuned while he has been the 2013-14 Perrin Moorhead and Bruns Grayson Fellow at Radcliffe. “That’s what modern productions [of the Greek tragedies] are missing. … These plays are meant to be in dialogue with one another” and amid the audience, he said.

The new production represents something of a shift for the young director, who gravitated toward playwriting and directing when a college professor told him flatly, — and, Graney admits, truthfully — that he was “a bad actor.”

Over the past couple of years, the Saugus, Mass., native and founding director of the Chicago theater company The Hypocrites, has turned from wanting to create “high art productions,” like the work he once staged in a type of human terrarium that engulfed the actors on the stage, to works that help create a community of audience members.

But reaching people through the medium of the Greek classics can prove difficult. For Graney, the plays don’t carry the lyricism of the lines penned by William Shakespeare, and when companies try to approach the roles too realistically, he said, “it doesn’t work well.”

“When we look at these classic texts through our contemporary eyes, there’s a disconnect, and I think there needs to be a bridge.”

He built that sort of bridge five years ago with his staging of “Ajax” by Sophocles, using just three actors to play all the parts, and substituting the Greek chorus’s heady odes with rock songs he wrote himself. The production was well-received, and he went on to adapt all seven of Sophocles’ plays together. Producers were nervous at the thought, but audiences loved the result.

Graney next set his sights on adapting the seven surviving plays of Aeschylus. After adapting two of the works, he decided that doing the entire 32 surviving Greek tragedies wouldn’t be that much more work. “I was already a third of the way there, and thought, ‘How hard could it be?’ ”

Working with actors from Harvard’s American Repertory Theater’s (A.R.T.) A.R.T. Institute, Graney has continued to tinker with the production. He ran a theater seminar during the January arts intensives at the space Arts @ 29 Garden, where he worked on staging and directing with Harvard College students using one of his adapted plays. He staged an earlier reading of the full production late last year, after which he trimmed the cast almost in half.

“I love tweaking,” said Graney. “I will be changing it up until opening night at some unforeseen production.”

He also loves creating a community with his works.

“My desire is to re-create the best aspects of the Athenian society … like the importance of talking to each other. When was the last time you were in a room with the same people for 12 hours? I just want people to be together and be inspired to share ideas.”

And if people are willing to stick it out for the 12 hours, said the playwright, “I think an actual magic will happen.”