When forests take the hit 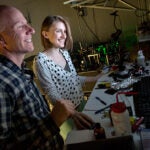 This spring, more than 40 percent of the western U.S. is in a drought that the U.S. Department of Agriculture deems “severe” or “exceptional.” The same was true in 2013. In 2012, drought even spread to the humid East.

It’s easy to assume that a three-year drought is an inconsequential blip on the radar for ecosystems that develop over centuries to millennia. But new research just released in Ecological Monographs shows how short-lived but severe climatic events can trigger cascades of ecosystem change that last for centuries.

Some of the most compelling evidence of how ecosystems respond to drought and other challenges can be found in the trunks of our oldest trees. Results from an analysis of tree rings spanning more than 300,000 square miles and 400 years of history in the eastern U.S. — led by scientists at the Harvard Forest, Columbia’s Lamont-Doherty Earth Observatory, and elsewhere — point to ways in which seemingly stable forests could abruptly change over the next century.

“Trees are great recorders of information,” says Dave Orwig, an ecologist at the Harvard Forest and co-author of the new study. “They can give us a glimpse back in time.”

The tree records in this study show that just before the American Revolution, across the broad-leaved forests of Kentucky, Tennessee, North Carolina, and Arkansas, the simultaneous death of many trees opened huge gaps in the forest — prompting a new generation of saplings to surge skyward.

There’s no historical evidence that the dead trees succumbed to logging, ice storms, or hurricanes. Instead, they were likely weakened by repeated drought leading up to the 1770s, followed by an intense drought from 1772 to 1775. The final straw was an unseasonable and devastating frost in 1774 that, until this study, was only known to historical diaries like Thomas Jefferson’s “Garden Book,” where he recounts “a frost which destroyed almost every thing” at Monticello, Va., that was “equally destructive thro the whole country and the neighboring colonies.”

The oversized generation of new trees that followed — something like a baby boom — shaped the old-growth forests that still stand in the Southeast today.

“Many of us think these grand old trees in our old-growth forests have always been there and stood the test of time,” says Neil Pederson of the Lamont-Doherty Earth Observatory, lead author of the new study. “What we now see is that big events, including climatic extremes, created large portions of these forests in short order through the weakening and killing of existing trees.”

Pederson, who will become a senior ecologist at the Harvard Forest in fall 2014, notes that as climate warms, increasing drought conditions and earlier springs like that of 1774 could easily expose eastern forests to the kinds of conditions that changed them so abruptly in the 17th and 18th centuries. “We are seeing more and more evidence of climate events weakening trees, making them more likely to succumb to insects, pathogens, or the next severe drought,” says Orwig.

The full paper, “The Legacy of Episodic Climatic Events in Shaping Temperate, Broadleaf Forest,” is available in the journal Ecological Monographs.