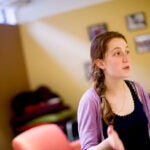 The poetry of slam

A sophomore reflects on her welcome-to-Harvard weekend, and where it led

This weekend, nearly 1,300 admitted students are expected to visit the Harvard campus for Visitas, the annual introduction to Harvard. Pre-freshmen from across the United States and the world will travel to Cambridge for a taste of life at Harvard, and mark the return of Visitas. (The event was cancelled last year after the marathon bombing.) Herman Kaur Bhupal ’16, a member of Eliot House and a concentrator in economics originally from Chapel Hill, N.C., offers here a reflection of her first visit to Harvard.

Annenberg is quite large, as far as dining halls go. You walk in for the first time as a pre-frosh during Visitas and you have one of two thoughts: Either you have just entered the world of Harry Potter and you are in the Great Hall, or you have no idea how you are going to find someone familiar in the sea of faces.

At least, that was my first experience when I had dinner in Annenberg, the first-year students’ dining hall. I walked in with a girl I had met on the walk over, and we both showed our temporary IDs to get in. We sat down with some other pre-frosh she recognized from an open house earlier in the day, and we joined the conversation. That meal in Annenberg was the first time I met a guy my age who identified as a feminist — and that meant a lot to me as the then-president of the four-person feminist club at my high school. It was also when I learned the difference between “SoCal” and “NorCal,” and it was the first time I passed my phone around and got so many new numbers that I wasn’t sure whether I would be able to match each number with a face and name.

These may seem like random things that happened over the course of a meal, but occurrences like that continued throughout the duration of my first visit to Harvard. These interactions with the students who would become my friends and classmates made me feel a sense of connection and belonging. No one was too much like me, but I felt like I fit in with the Class of 2016.

On the afternoon of my last day visiting campus, my dad arrived. No one in my family had ever been to Boston. And my mom did not like the idea of me choosing a college before either she or my dad had seen and approved of my choice.

Once he was here, I showed him around as if I had been on campus for weeks, not two days. It may sound clichéd, but after just two days, it did not take too much imagination to see myself as a proud Harvard student. I was already amusedly exasperated that our mascot was a color instead of an animal, I already knew never to leave my dorm without an umbrella, and I already had a dozen reasons why we were better than our rivals in New Haven.

By the conclusion of my Visitas experience, I could see myself making Harvard my home, and in my time here so far, I feel as if I have done just that. I have found a family in my circle of friends, and I know that we will continue to be close for years to come. I have confronted my stage fright by dancing with Harvard’s Bhangra team, been introduced to the business world by joining Harvard Undergraduate Women in Business, and gotten to delve deeper into issues of identity and social justice as a part of Harvard Dialogues. The people here have taught me how to push my comfort zone and enjoy every minute of it.

If you had told me in high school that I would have the opportunity to meet inspirational people like Malala Yousafzai and perform in front of influential people like Bill Gates, I wouldn’t have believed you, but I did just that this past September. If you had told me that I would be getting coffee with some of my favorite professors to talk about interests beyond what was taught in their classes, I would have thought it too ideal to actually happen, yet I have done that repeatedly.

I learn something new every day from my passionate and driven peers and professors, and I am extremely grateful to have the opportunity to be a Harvard student and take advantage of all the resources this place has to offer. Harvard has repeatedly exceeded my expectations of what college would be like, and I cannot imagine myself anywhere else.