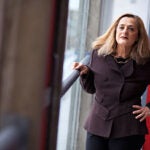 An emphasis on complexity in Williams’ Tanner Lectures

Late yesterday, in a packed Paine Hall, Rowan Williams, the 104th archbishop of Canterbury, gave the first of his Tanner Lectures on Human Values — part of a traditional series delivered at nine or more universities across the world since 1979.

With a complex critique of empathy, he quickly got into the spirit of what philanthropist Obert Clark Tanner intended for the series he founded: “a search,” Harvard President Drew Faust reminded the audience, “for a better understanding of human behavior and human values.”

And who better to investigate the meaning of empathy, said Homi K. Bhabha in his introduction, than Williams, a theologian, philosopher of language, poet, and translator? (Bhabha, the Anne F. Rothenberg Professor of the Humanities, is director of the Mahindra Humanities Center, which hosts Harvard’s Tanner Lectures. The series continues at 4 p.m. today and Thursday.)

Books by Williams — who is now master of Magdalene College, Cambridge — reveal a man engaged with life’s ethical trials. In “The Wound of Knowledge” (1979), a survey of Christian thought, he wrote of the world as “a possible theater for God’s creative work.” In “Faith in the Public Square” (2012), his last book as archbishop, he drubbed a consumerist world that he sees as veering away from any sense of commonweal.

Williams used his Tuesday lecture, “The Other as Myself: Empathy and Power,” to critique certain ideas of empathy: the sentimental embrace of an engine of moral development that connects us to the feelings of others; and the scientific notion that empathy is something wholly measurable by magnetic resonance imaging. Both views, he said, fail to take into account the complicated dynamics of the self in search of the feelings of the other. Underplayed in today’s views of empathy, said Williams, are the complications of language, culture, and power.

For one, “empathy is a newcomer to language,” he said, which makes it difficult to see it as a quality “at the center of creating a moral individual.”

For another, though scientists have done praiseworthy work in “mapping the brain in affective states,” said Williams, the results aren’t enough to describe the origins of ethics, a complex arena that remains “undeniably a linguistic and cultural discourse.”

All cultures share “the terrible commonality of suffering,” said Williams, and yet many have competing ideas of what deserves empathy. He remembered a pilgrimage to the Holy Land 40 years ago. One day his group visited a Palestinian village ravaged by war; another, an Israeli Holocaust museum. “Where does empathy belong,” he asked, “and what does it solve?”

It’s possible to solve that dilemma by giving to one side or another, said Williams, who used the analogy of two charities, each with “competing claims for empathic response.” This dilemma establishes that “empathy is not the sole model for raising ethical awareness,” he said. “An entire social world of moral possibilities” becomes too complicated for empathy to culturally mean just one thing.

That cultural dimension deepens on a personal scale, when “the self” feels an empathic impulse toward “the other” — an interaction that will always be skewed by inequalities of justice and power, said Williams. Viewed one way, an empathic impulse may become an effort to “colonize” the feelings of a weaker party, not to blend with them, he said, making attempts at empathy a failure “to sense the emotional completeness of another.”

For guidance, Williams went back a century, to a largely forgotten phenomenologist named Edith Stein. Born a Jew in 1891, she converted to Catholicism in 1922, and then became a Carmelite nun in 1935. Sister Teresa Benedicta of the Cross — Stein — was killed at Auschwitz in 1942 and canonized in 1998.

For Williams, Stein’s circa-1916 philosophical studies rescue empathy’s complexity — making it something that “doesn’t focus on feeling another’s emotions,” he said, but a dynamic that is “unsettled all the time. The process of empathy teaches a person as much about the self as about the other.

In his post-lecture response, University of Chicago Professor David W. Tracy was grateful for Williams’ critique of today’s rhetoric of empathy, and his attempt to make our understanding of it “wider and more complex.”

He was also grateful to be reminded of Stein, “a well-deserved retrieval” for her idea that empathy is contained within “the inescapable body … not just the mind.” She reminds us that it is important “to sense another as a living body,” said Tracy. In turn, that image was compatible with Williams’ argument: In attempting to see the others, we begin — in stages — to see ourselves.