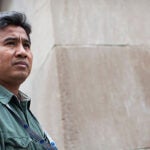 Deep into a bloody history

Shifting European notions between the late Middle Ages and the Scientific Revolution of what it meant to be human were shaped by many things, including the concept of monsters and werewolves. Surekha Davies, assistant professor of history at Western Connecticut State University, spoke Thursday evening at the Harvard Science Center about how scholarly texts (which debate the existence and properties of fictional lycanthropes and their relations, dog-headed humans) and the work of cartographers (whose maps of the New World provided a window into the “monstrosity” of strange and distant peoples, such as the “giants” of Patagonia or the “headless people” of Guyana described by Sir Walter Raleigh) helped to mold the perceived boundaries between humans, monsters, and animals. The concept of the monster, she said, is also essential for understanding the history of racial science, and the ways in which early modern science was a visual pursuit. The talk was sponsored by the Early Sciences Working Group, the Early Modern History Workshop, and the seminar on the History of the Book at the Mahindra Humanities Center.