The poetry of slam 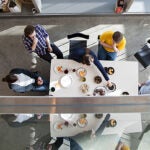 When Cassandra Euphrat Weston ’14 came to Harvard by way of San Francisco, she missed something.

So she decided to start one. That idea hatched during Wintersession, when Euphrat Weston and Kyra Atekwana ’14 secured funding for a class that proved so successful it segued into an official student group they dubbed Speak Out Loud (SOL).

“Most young people discover slam poetry through YouTube,” said SOL member Virginia Marshall ’15. “But it started as an art form in Chicago in 1985.”

“I was lucky enough to be introduced to spoken word through the organization Youth Speaks, which is a wonderful organization in the Bay Area,” said Euphrat Weston, “and I was thrilled by what I found — this idea that everyone’s voice was a great voice for poetry, and poetry could communicate ideas and be a means of empowerment and be technically brilliant and on-stage.”

Known for its theatricality, slam poetry is memorized and typically more energetic than traditional page-poetry. Slam poets often have a political leaning, or a deeply personal one, with topics ranging from sexuality to race.

What is spoken word?

Speak Out Loud members Melanie Wang ’15, Awais Hussain ’15, and Olu Animashaun ’14 discuss the art of spoken word in this interview with WHRB.

And there’s a competitive aspect to slam poetry. Judges are audience members picked at random. Scores are averaged over two rounds, culminating with a winner. SOL is active in the College Unions Poetry Slam Invitational, held at different universities each year.

“We learn a lot through one of our members who is a dancer, and they’ve taught us a lot about how to use our bodies in ways that move the words along,” said Marshall.

'Mona Has a Big New Problem'

Now in its third year, SOL is gearing up for Poetas, a large-scale SOL performance that will be held April 26 during the Visitas weekend to welcome prospective freshmen.

“We’ll also be rehearsing, editing, and workshopping poems together. It’s really exciting to have the first event of this kind,” said Marshall. “I hope a lot of pre-frosh see that we have a really vibrant community here, and to be aware of us as a group before they accept admission here.”

“SOL is a space where we ask why we write. There are many places at Harvard to ask how we write or how other people write. And there’s a lot of craft, and I care a lot about craft, but we also care about what we say and why we’re saying it, and that’s something I always come back to,” said Euphrat Weston, who will graduate next month.

She’s thrilled to be leaving behind something permanent, and in capable hands.

“People at the helm have so much energy that I couldn’t imagine having, and I’m sure they’ll take it directions I can only imagine,” she said. “I hope SOL only continues to grow.”