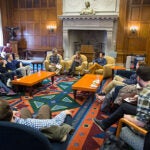 For writers and students, a break from solitude

In Harvard visit, filmmaker reveals motivations behind his craft

What do a man-eating shark and a maniacal truck driver have in common? They both helped launch Steven Spielberg’s career. During an appearance at Harvard on Tuesday, the Oscar-winning director recalled the offbeat stars of his early movies and explained the bedrock influences behind his decades of notable filmmaking.

Harvard President Drew Faust introduced the session, which was sponsored by the Mahindra Humanities Center’s Rita E. Hauser Forum for the Arts, welcoming Spielberg as a fellow historian, and “as much an educator as an artist.”

Center director Homi Bhabha oversaw the 90-minute conversation with the director, which included questions from the audience. Bhabha, who structured the evening around clips from Spielberg films, opened with a snippet from the 1971 TV movie “Duel,” about a motorist terrorized by the mysterious driver of a tractor-trailer truck.

The film had a particular relevance because it was the first project Spielberg really “went after,” he said, and because he was “terrified of merging onto any freeway anywhere in the country.”

“I didn’t relate to ‘Duel’ as something that might have happened to me, being bullied or anything when I was a child. I related to ‘Duel’ because I was terrified of trucks. And I thought ‘This is perfect. If they only give me the job, I know how to scare people because I know what scares me.’”

He knew how scare people with his next movie, too. Many in the audience groaned when composer John Williams’ menacing score started during a clip from “Jaws,” the 1975 film that changed the way many beachgoers played in the surf. The film also revolutionized the movie industry. It was widely considered the first summer blockbuster and introduced studio executives to the financial power of a summer thriller distributed in wide release.

Spielberg said he got the directing job by pitching the producers on the idea that “‘Jaws’ was ‘Duel’ on the water.”

“‘I can do the shark like the truck, I swear.’ That’s exactly what I said … and they hired me.”

Spielberg said he relates to the clip, in which a shark kills a boy, much differently today as a father than he did as a budding filmmaker looking to move the story along. “What really pains me is when the mom comes down [to the shore], and she can’t find her son. … Now I look at that, and it has an entirely different meaning to me.”

But when he created that scene, he recalled, careful preparation was critical.

“What I think is essential for filmmakers to really learn how to do … is to see the scene first in their head, figure it out almost mathematically, and then go out and shoot it.”

The Ohio native’s interest in films came by way of his childhood love of crashing his electric toy trains together, he told Bhabha. “I had grown accustomed to the destruction … I couldn’t live without it.” When his father threatened to take the trains away if he continued to break them, Spielberg grabbed his father’s eight-millimeter Kodak movie camera and captured a crash on film instead.

He called his 1982 science-fiction film “E.T.,” about an alien left behind on Earth and his friendship with a lonely young boy, his “first truly personal film,” explaining how he combined a story about his parents’ divorce with the idea of an abandoned creature. The extraterrestrial was inspired by Spielberg’s prior work on the 1977 science fiction hit “Close Encounters of the Third Kind,” by his boyhood fascination with the stars, and by his belief that “there’s no possible mathematical way that we ever could be alone in the universe.”

At its core, Spielberg added, “E.T.” is a story of repair.

“I also thought that if you could learn to love something that looks like [E.T.], then that opens your empathic pathways in all directions, including healing and repairing the damage done in a divorce.”

Family, empathy, and reconciliation became familiar themes in his work, and he often offered audiences a resolution at the end of his films. For him, the period 1933 to 1959 constitutes the golden era of films, since most movies made then involve “stories that completely resolve themselves.”

“I am a guilty party to wanting to complete the sentence by the end of the picture. The audience has made an investment, and I usually try to find some way to put a period on it.”

Children are often key players in his films because they offer the audience an “unfiltered, genuine” perspective.

His topical films, such as “Lincoln,” “Munich,” and “Saving Private Ryan,” developed out of his passion for history, instilled in him by his father, a World War II veteran who hosted reunions with other veterans in the Spielberg living room.

“I got to hear stories about freedom and stories about sacrifice. … All of this … led me to a love of history, and I just became fascinated with it, all those values.”

Asked by Bhabha what will happen to filmmaking when the “public audiences for cinema diminish” as viewers gravitate to newer technologies, Spielberg was optimistic, insisting that there will always be a place for movies “in some form or another as a public communion.”

“There may be a different technology, but we are always going to come together to have the experience. I can’t imagine any time in the near or distant future where people are going to want to be entertained or informed by themselves or with just one or two people around. We’re a society that needs company.”

Offering hope to young directors in the audience Spielberg said he frequently finds new talent via the Internet, which he called “a huge theater to audition who you are and what you have to say about yourself in the world.”

He also said he ignores technique in favor of storytelling, searching instead for “people who are saying something to us that we don’t hear every day.”

“I don’t look for craft anymore. I am not looking for where the camera goes, what the lighting looks like. I am looking for a new idea when I look for a new young filmmaker.”