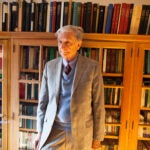 The Harvard Alumni Association (HAA) announced that Richard Barth ’89, chief executive officer of the KIPP (Knowledge Is Power Program) Foundation, has been chosen to serve as Harvard University’s chief marshal at this year’s Commencement ceremonies.

The chief marshal is selected each year from the ranks of the College’s 25th reunion class. Barth joins a roster of distinguished alumni dating back to the late 19th century. According to the 1892–93 Harvard Graduates’ Magazine, the installation of a chief marshal likely began in the 1880s, following Harvard’s 250th anniversary celebration. The position is a special honor granted to individuals who not only have achieved success in their careers but also have contributed to Harvard and society as a whole.

On Commencement Day the honoree hosts the Chief Marshal’s Spread, a luncheon for dignitaries and guests. The marshal also selects “aids” to assist the HAA’s Happy Observance of Commencement Committee and leads the University-wide alumni procession into Harvard Yard for the Annual Meeting of the Harvard Alumni Association (the Afternoon Program).

“Richard is a wonderful choice,” said HAA President Catherine A. Gellert ’93. “He has devoted his career to helping students succeed, despite great obstacles, and his selection signals his class’s admiration for all that he has achieved.”

“I am humbled that my classmates have chosen me for this honor,” said Barth. “My experience as an undergrad at Harvard was transformative, and opened my eyes to what a college education can do — not only for me, but for others. Now, in my work with KIPP, I feel fortunate to be able to contribute toward helping students from our nation’s most underserved communities succeed in college and lead choice-filled lives.”

The recognition from his College peers is a fitting tribute for Barth. An American history concentrator, he has championed education since his undergraduate years, when a history seminar led to what he described as a “deep, personal inquiry” into the history of race relations and, ultimately, the transformative role of education.

In December 2005, he was named CEO of the KIPP Foundation, which oversees the national network of KIPP public charter schools. During Barth’s tenure, KIPP has expanded from 45 to 141 schools, serving more than 50,000 students across the country — 85 percent of whom are from low-income backgrounds. KIPP’s college completion rate is above the national average for all students and four times the rate for students from low-income families.

“At Harvard, I met extraordinary people — classmates and professors — from all walks of life,” Barth said. “I was exposed to ideas that set me on the course I have pursued day in and day out for the past 25 years.”

Barth is an Aspen Institute Fellow and a member of the Aspen Global Leadership Network. In March, he was named a 2014 Schwab Foundation Social Entrepreneur of the Year. He currently serves on the board of directors of 50CAN, The Broad Center for the Management of School Systems, ROADS Charter High Schools, and General Assembly.

Harvard’s 363rd Commencement will be held May 29. To reserve tickets for the Alumni Spread Luncheon and the Annual Meeting of the Harvard Alumni Association (the Afternoon Program), please visit alumni.harvard.edu/annualmeeting.