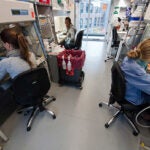 With a wry smile, Marlon Kuzmick, associate director of the Bok Center for Teaching and Learning, kicked off a discussion dubbed the “Idea Exchange” with a simple prompt: “I would like to use social media to …”

Hosted by the Office of the Vice Provost for Advances in Learning, the event on March 26 gathered faculty, staff, and students to discuss social media at Harvard. While civil in tone, the exchange began with participants throwing Kuzmick’s softball question right back at him.

For many, including David Cox, assistant professor of molecular and cellular biology and of computer science, social media from Twitter to Tumblr have become tools like any other — such as a pencil that is well-worn, familiar, and, sometimes, dull.

Cox, who developed a custom learning platform for his HarvardX online course “MCB80x: Fundamentals of Neuroscience,” said that he has no fewer than six Twitter handles. Each serves a different purpose. Some relate to work with professional academic societies. Others point specifically at his online course, which enrolls 30,000, and still others serve as a means to take on pet peeves anonymously.

Jake Silberg ’15, an undergraduate with a start-up under his belt (Valet.io, a fundraising app), took the question a bit more literally, presenting a systematic tour of the social media landscape he sees on campus.

“For students, Facebook is for friends you know and Twitter is for building your professional reputation as an expert or influencer,” he said. Instagram is somewhere in the middle, reaching broader, lesser-known audiences through as-it-happens snapshots. With a camera on every phone, sharing across all platforms has become increasingly visual. In fact, the right picture at the right time — like a group selfie of Oscar winners or a photo bomb with President Barack Obama — may be worth more than 1,000 words. It may be worth 1,000,000 retweets or shares.

Perry Hewitt, the University’s chief digital officer, said she applauds the positive power of social media to “break down silos” and integrate and disseminate rather than control information across campus. Users, however, should know the often hidden risks inherent in going viral online.

The speed-of-light nature of a Vine video or tweet is hard to fathom in the abstract. A seemingly innocuous tweet can take on new meaning in the near-instantaneous news cycle, particularly when the Harvard name is appended.

Meghan Morrissey, a lead course developer at HarvardX, noted that in some cases going viral can be the intentional. She and the team behind “SW12x: China” created a YouTube sing-along-video to help students remember the order of China’s dynasties. The team members catered the video to Chinese audiences, uploading it to Chinese social-media sites. Voila, the video has scored more than 1 millions views, with about 90,000 coming from YouTube downloads and the rest via uploads through China’s video websites, its social media channels, and TV, among other sources.

At the other extreme, Sue Goldie, Roger Irving Lee Professor of Public Health and director of the Harvard Global Health Institute, said she used Twitter in a more targeted manner, to make sure her kids were not in any trouble, as she assumed that the “Twitterverse” would tell her before anyone made the proverbial phone call.

On a more serious note, while she has used social media to further her global health work and to encourage students to condense complicated arguments for a world with an attention span of 140 characters or fewer, she worries that free and open platforms may not be safe spaces, especially for groups that are disenfranchised or politically targeted.

Graduate student Carla Martin, a College Fellow on African and African American Studies, echoed Goldie’s sentiment. Nonetheless, Martin said she is eager to further the use of technology to help students find their voices, especially women and minorities. In fact, the seeds of “I, Too, Am Harvard,” a Tumblr-fueled campaign to raise awareness about race and belonging at elite college campuses, came partially from an exercise she ran in one of her classes.

But even as the small group shared success stories about using Twitter or Facebook to promote events and causes or implementing discussion-board software like Piazza to convene conversations, an undercurrent of concern swelled.

Michelle Luo ’14, a computer science concentrator who has been a teaching fellow for CS50, “Introduction to Computer Science,” and an intern at Google, said she limited her personal use of social media because of privacy concerns. Morrissey said the same, as others nodded in agreement.

Judith Singer, James Bryant Conant Professor of Education at the Harvard Graduate School of Education and senior vice provost for faculty development and diversity, captured the mood swing when she told of all the orphaned accounts she created on then- new social-media platforms, but later abandoned. Singer signed up for Facebook “to see what it was all about” in the days when users had to have a Harvard email address to join. She has rarely visited the site since.

Goldie surmised that such reticence may come from the growing concern that there are “ethical and appropriateness issues” across all of the sites, buried in the 8-point type of legal waivers to which most users agree without much scrutiny.

Michael Mitzenmacher, Thomas J. Watson Sr. Professor of Computer Science, who runs the popular blog My Biased Coin and has conducted research on whether Groupons influence Yelp ratings, had one simple demand for administrators: “Do not create your own platforms! Harvard is not a software company.”

Cox put it in simpler terms, saying, “We have to go to where the conversations are. Are we going to be part of the discussion where it is happening or try to unsuccessfully funnel them to one place?”

By the end of the hour of friendly-fire debate, the initial question — how to use social media on and beyond campus — had come full circle while remaining open.

Goldie got the last word, asking, “How can we use and exploit social media spaces to further conversations and yet keep these privacy security concerns in mind?”