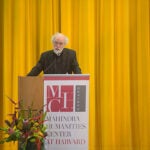 A wide range of scientific testing indicates that a papyrus fragment containing the words “Jesus said to them, my wife” is an ancient document, dating between the sixth to ninth centuries C.E. Its contents may originally have been composed as early as the second to fourth centuries.

The fragment does not in any way provide evidence that the historical Jesus was married, as Karen L. King, the Hollis Professor of Divinity at Harvard Divinity School (HDS) has stressed since she announced the existence of the fragment in the fall of 2012. Rather the fragment belongs to early Christian debates over whether it was better for Christians to be celibate virgins or marry and have children. The fragment is important on this issue, according to King.

“The main topic of the fragment is to affirm that women who are mothers and wives can be disciples of Jesus — a topic that was hotly debated in early Christianity as celibate virginity increasingly became highly valued,” she explained.

King had written extensively about the meaning of the fragment and the testing in the latest edition of the Harvard Theological Review. The Divinity School has posted documents and articles related to the fragment on a special Web page. King first announced the existence of the fragment on Sept. 18, 2012, at the International Congress of Coptic Studies in Rome, and dubbed it “The Gospel of Jesus’ Wife.” The use of the word “gospel” makes no claim to canonical status. The term refers to the fragment’s most distinctive claim (that Jesus was married), and serves as a shorthand reference to the fragment, according to King.

King received the fragment from its owner in December 2011 and in 2012 took the papyrus to New York, where it was examined by Roger Bagnall, director of the Institute for the Study of the Ancient World at New York University. After Bagnall’s initial assessment that the fragment was ancient, based on handwriting and other features, further analysis began in earnest.

Over the past two years, extensive testing of the papyrus and the carbon ink, as well as analysis of the handwriting and grammar, all indicate that the material fragment was created between the sixth and ninth centuries C.E. None of the testing has produced any evidence that the fragment is a modern fabrication or forgery.

Two radiocarbon tests were conducted to determine the age of the papyrus. In the first test, the sample size was too small and resulted in an unreliable date. A second test performed by Noreen Tuross at Harvard University in conjunction with the Woods Hole Oceanographic Institution dated the origination of the piece of papyrus to between 659 and 859 C.E. Other testing with FT-IR microspectroscopy at the Massachusetts Institute of Technology confirmed the homogeneous chemical composition of the papyrus and examined patterns of oxidation.

At Columbia University, James Yardley and Alexis Hagadorn used a technique called micro-Raman spectroscopy to determine that the carbon character of the ink matched samples of other papyri that date from the first to eighth centuries C.E.

Malcolm Choat from Macquarie University examined the fragment at HDS and offered an independent assessment of the handwriting.  Microscopic and multispectral imaging provided other significant information about the nature and extent of the damage and helped resolve a variety of questions about possible forgery. If, for example, ink had pooled on the lower fibers of the front, it would have shown that the papyrus was written on after it had been damaged. Or if the alpha had overwritten a sigma in line four, it would have shown that someone tampered with an ancient fragment that read “the woman” by changing it into “my wife.” No evidence of this kind is apparent, however.

After all the research was complete, King weighed all the evidence of the age and characteristics of the papyrus and ink, handwriting, language, and historical context. She concluded that the fragment is almost certainly a product of early Christians, not a modern forger.

Nothing is known about the discovery of the fragment — which measures only about 1½-by-3 inches — but it is assumed to have come from Egypt because it is written in Coptic, the form of the Egyptian language used by Christians there starting in the Roman imperial period.

Twice in the tiny fragment, Jesus speaks of his mother, his wife, and a female disciple — one of whom may be identified as “Mary.” The disciples discuss whether Mary is worthy, and Jesus states that “she can be my disciple.” The real author of the fragment is not known and would likely remain unknown even if more of the text of the Gospel of Jesus’s Wife had survived. This remaining piece is too small to know anything definite about who may have composed, read, or circulated it, except that they were Christians.

“This gospel fragment provides a reason to reconsider what we thought we knew by asking what the role claims of Jesus’ marital status played historically in early Christian controversies over marriage, celibacy, and family,” King said.